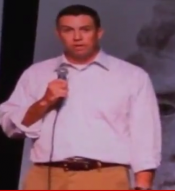 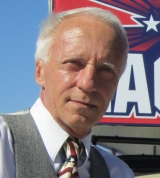 June 5, 2012 (San Diego’s East County) – Republican Congressman Duncan Hunter has dodged a series of debates with his four opponents vying for the 50th Congressional District seat—with one exception. He showed up at a conservative Tea Party candidate forum in Ramona on May 19.  Now Democrat David Secor has released a full video of Hunter’s remarks, along with a barbed critique.

“He clearly does not know history or economics,” said Secor, who cited several examples. “He also said quite clearly that he was not interested in the views of his constituents in the district,  that he voted “his conscience,” and that if voters didn’t like it they should vote him out of office. That was the only part of his diatribe that I completely agreed with.”

View the video, at this link, and scroll down to see Secor’s commentary:    http://www.youtube.com/watch?v=Cg9cKKN5XnU

Hunter tried to make the case that American progress after WWII is the reason for the economic crash in 2008.  He first said it was 40 years of "Democratic control," then moments later said it was 60 years, that ruined the economy.  I'm old enough to remember the '50's and 60's when a middle class family had a dad with decent wages, when mom could stay home and raise the family, and the kids all had a great education, when college tuition was really affordable, when we were not in a state of constant war, and the economy was humming and the best in the world.

Hunter seemed unaware the the U.S. had no deficit as late as 2000, that the massive tax cuts in 2001 and 2003 produced no net jobs in 8 years, that we fought 2 wars and added an $800 billion drug benefit without paying for them, that fraud committed by banksters brought on the crash,or that even the very conservative "Washington Times" called Mr. Hunter's 112th Congress the worst performing - not in the last 40 or 60 years - but in American history.  Hunter was unapologetic and pledged to do more of the same.

Protecting our Constitutional rights is his "top priority," yet he voted to extend the Patriot Act, to keep citizens from demonstrating near politicians, to encourage spying and passing information on private citizens with CISPA, to allow the military to round up private citizens, and indefinitely detain them without legal recourse, based on some "suspicion" by "someone" that the citizen might "somehow" be linked to "some group" the government doesn't like.  These votes violated at least our 1st, 4th, 5th, and 6th Amendment rights, but Hunter does not appear to understand this.

He even blamed his father, saying people his father's age made this mess and he and the "new generation" of politicians will press the "reset button," after which something, it wasn't clear what, would make it all better.  Hunter said several times that the 60 or so extremists that came to the House in 2010 were determined to push the "reset button," which could only mean returning to the pre-FDR rules - no Social Security, no Medicare, no FDIC insurance for our bank deposits, no Glass-Steagall Act, etc.

Hunter said the state of California was broken, that he wanted a secure border, tax cuts, and less regulation.   He seems to believe the "success?" of the last 12 years of lower taxes and less regulation prove we need to do it again and expect things to turn out differently.

He also said quite clearly that he was not interested in the views of his constituents in the district, that he voted "his conscience," and that if voters didn't like it they should vote him out of office.  That was the only part of his diatribe I completely agreed with.

My opinion is that Mr. Hunter has studied the current extremist dogma well.  Yet he clearly does not know history, or economics, or logic, is  in way over his head, and flailing to stay afloat.  Hunter offered no plans to bring jobs to, or improve the district, and I got the clear impression Hunter thought we'd all be better off if we left the "welfare" state of California.