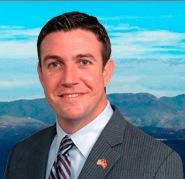 East County News Service
February 19, 2019 (Washington D.C.) – Congressman Duncan Hunter (R-Alpine) voted against last week’s spending bill that forestalls another federal shutdown due to lack of funding for a border wall sought by President Donald Trump.  But he also voices concerns over the President declaring a national emergency to build the border wall that the majority of Congress declined to fund.

The spending bill negotiated by House and Senate leadership provides federal spending for the remainder of the fiscal year. The Congressional bill allocates $1.3 billion for border security including 55 miles of new barriers in the Rio Grande Valley, far short of the $5 billion for a border wall that Trump sought.

Hunter, in a press statement, says he is concerned about the bill due to “lack of adequate funding for border security, including a wall, and its inclusion of several unnecessary and questionable provisions that will adversely affect border security efforts as a whole.”
Hunter adds, “We just need to get this done.  Border security should be a top priority for every Member of Congress, not just for those like myself who have districts in border regions.  For years, I have advocated for a border barrier because I know firsthand it has proven effective.  Unfortunately, like many other things, this issue has become a political football and we are once again at risk of having no meaningful progress.” He faults Democrats and says Trump should have held firm on his original proposal to Congress – a proposal that earlier led to the longest government shutdown in U.S. history.
Democrats have contended that after winning 40 seats in the House last November, their party believes it has a mandate to oppose the wall Trump promised during his campaign to build.  Democrats have long argued for comprehensive immigration reforms instead of solely a barrier.
But Hunter states, “Additionally, while I wholeheartedly support building the wall, I have significant concerns with the President declaring a national emergency in order to obtain funding in this manner.  This action more than likely will result in legal action, delaying border security efforts further, and the precedent it can set for future administrations is concerning.”
He indicates he will continue to support border enforcement “in all aspects knowing this investment is best for my constituents and our nation as a whole.”

Duncan Hunter being reelected in East County earned national scorn on TV. We were laughed at, and we deserved it. He is a criminal (and a real prince of a husband), and it's obvious the good folks of East County didn't expend two seconds educating themselves before voting. I need a congressman; I have concerns that I'd like to have addressed by my representative, but not this guy. Not any republican, to be honest. Republicans invariably fail to stand up to abusive power; they spend tax money (not theirs) like drunken sailors; they lie; they cheat; they steal. Then they go on Fox to call Liberals names and instill fear and hatred of any progressive agenda. Wash. Rinse. Repeat. Until people realize that all the gridlock and obfuscation in Washington for the past ten years has been caused by the GOP (looking at you Mitch McConnell, as much as it hurts), we're going nowhere fast. And, Duncan? We don't need a border wall. Drugs come in through ports of entry, not over empty desert. Although it would be amusing to see red state ranchers have their property seized by eminent domain over a Boogeyman threat, it's actually not funny at all to see the wasteful spending going on. Kids in cages is not a laughing matter, nor is climate change. America is not "great again". We are divided, losing our place as the world's moral leader. Trump has his hand deep in our pockets, even as he has failed to pay his own tax burden. That burden is ours. And just like Trump, Hunter freely spends the tax money we pay to improve our communities and our lives to enrich himself. Duncan should shut up and sit down and let the grown-ups take over. Next election cycle, let's all try something new and actually invest a few minutes into educating ourselves on issues and whether our (ew) congressman has improved our lives in the past. If the answer is "he hasn't", then try something radical and vote for someone who CAN carry out the duties in an effective manner.
About 45 years ago, I worked at the fire station near the border, and there were "electronic devices" deployed there. So "apparently" we have a broken system in my view.
At the International Boundary (49th parallel) of the U.S. and Canada, there is no substantial, physical barrier or Wall separating the two countries. They use a variety of electronic devices and humans to keep an eye on things. And yes, it apparently works. https://splinternews.com/at-the-canadian-border-theres-no-wall-but-plenty-of-pe-1793862827