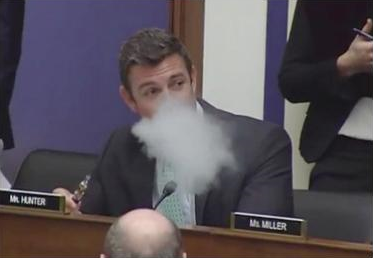 February 16, 2016 (San Diego’s East County) – The House Transportation and Infrastructure Committee passed an amendment that would impose a federal ban on vaping or e-cigarettes on all airlines in the U.S..  Congressman Duncan Hunter, who took over $10,000 in tobacco industry campaign contributions this election cycle, opposed the amendment–even lighting up during the hearing and puffing a cloud of vapor to make his point.

Hunter said vaping is helping him quit smoking.  He insisted that vaping poses no hazard to others. “There’s no combustion, there are no carcinogens…there is nothing noxious about this whatsoever,” he attested.

But in fact, vaping devices do contain multiple carcinogens.  Many have nicotine, which has a long and well-documented history of harmful health impacts.  Poison control centers also report a dramatic increase in nicotine poisoning among children due to e-cigarettes, the Centers for Disease Control and Prevention reported last April.

But even those devices with only flavored water vapor contain propylene glycol which when according to ABC’s MedWatch when vaped, turns into formaldehyde. Formaldehyde is an embalming fluid and known carcinogen, NBC news reports.  Some e-cigarettes and other vaping devices also contain other toxins and cancer-causing chemicals.

Health authorities worry also that tobacco marketers are using vaping to entice kids to start smoking.  “Big tobacco has largely taken over the e-ciagrette industry. Alongside unchecked marketing and advertising, e-cigarettes have exploded online.,” internet health expert John W. Ayers at San Diego State University, coauthor of the Internet Tobacco Vendors Study, states in a press release issued by SDSU on February 11th.  The researchers also found little evidence to support the claim that e-cigarettes are safe or effective as a means of helping smokers quit the habit.

Another risk is explosions and fires caused by vaping devices, typically due to using incompatible chargers.  The U.S. Fire Administration, in an October 2014 report for FEMA, documented at least 25 fires in the U.S. caused by e-cigarettes.  Most were on chargers when the explosions occurred, often on unauthorized charging units. The USFA warns, “The shape and construction of e-cigarettes can make them more likely than other products with  lithium-ion batteries to behave like `flaming rockets’ when a battery fails.”

Thus, Rep. Hunter’s claim that vaping poses no dangers to others is quite simply not true, according to medical and safety experts.

Fortunately for the safety of passengers and crew, most major airlines already ban vaping on planes.  The House committee was not swayed by Hunter’s puffing in the hearing, and voted to pass the amendment that if enacted, would ban smoking e-cigarettes or other vaping devices on all commercial airlines.

Hunter is not the first local politician to light up over a proposed e-cigarette ban.  During last year’s hearing in La Mesa on an e-cigarette ban, Councilwoman Kristine Alessio violated a city ban on smoking in the public building. She lit up an e-cigarette, sending then-Councilman Ernest Ewin, who is allergic, scrambling out of the Council seating area. La Mesa later voted to ban e-cigarettes in all places where tobacco is banned, following a similar law enacted by El Cajon.