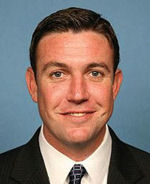 December 15, 2011 (Washington, D.C) -- Congressman Duncan Hunter has reported that he was informed by Major General David Baldwin, the Adjutant General for the State of California, that on February 29, 2012, the presence of National Guard troops on the Southwest border will be cut by half, at a minimum, and reapportioned along the border.  Specifically for California, the state share of National Guardsmen will be reduced from 264 Guardsmen to only 14 Guardsmen.
While the National Guard presence on the border is drawing down under the current authorization, there’s still a possibility that the President can extend their deployment in order to continue supporting the nation’s border security mission,” said Hunter.  “What’s apparent now is that a decision not to continue their deployment, even though it might be in the national interest to do so, would be based entirely on budget constraints on the Defense Department.  Preparations to absorb disproportionate reductions to the defense budget stand to impact not just our military mission overseas, but security on the border also, and I hope the President will recognize this fact and work with Congress to prevent such drastic cuts.”

Remaining Guard troops will be comprised of intelligence analysts, Hunter indicated.  The California National Guard is expected to submit its drawdown plan in January.