The measure comes in response to the fatal shooting of Kate Steinle at the San Francisco waterfront by Juan Francisco Lopez-Sanchez, an undocumented immigrant with five prior felony arrests. San Francisco, a sanctuary city, did not notify federal officials of Sanchez’s release despite pending deportation orders.  Mean while San Francisco’s mayor has announced plans to cooperate with the federal government for deportation of immigrants with a history of violent crimes—a small percentage of the total immigrant population.

California Senator Dianne Feinstein, a Democrat, has also spoken out to denounce San Francisco’s Sheriff  for failing to notify Immigration and Customs Enforcement (ICE) and allow them to remove him from the country.  She urged local officials to “prevent such a tragedy from happening again” by participating in a new Priority Enforcement Program that the U.S. Department of Homeland Security is rolling out this summer, already in the works under President Obama’s 2014 executive order on immigration reforms.

San Francisco Mayor Ed Lee’s spokesperson Christine Falvey confirmed  that the Mayor’s office has reached out to Homeland Security to learn how  participation in the  Priority Enforcement Program can help prevent future tragedies, the San Francisco Chronicle reports.  Falvey confirmed that the city’s sanctuary ordinance “does not prohibit local law enforcement from contacting authorities” and that the Mayor “has always maintained that our sanctuary status does not create a safe haven for people convicted of serious or violent felonies.”

The sanctuary cities controversy comes on the heels of national attention drawn  to inflammatory anti-immigrant remarks made by presidential candidate Donald Trump. Trump said last month that illegal immigrants crossing the U.S.-Mexico border are in large part “rapists” and “murderers.” 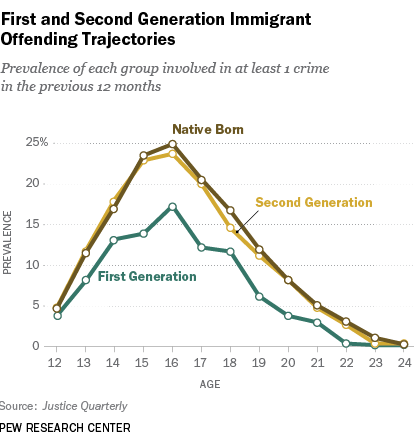 But in fact,  the Washington Post reports, immigrants are actually less likely to commit crimes than people born in the U.S.

Pew Reserach found, "The crime rate among first-generation immigrants — those who came to this country from somewhere else — is significantly lower than the overall crime rate and that of the second generation." (See chart, right)

Currently there are at least 60 sanctuary cities in the U.S. including such major cities as New York, Los Angeles and Houston.   The laws arose to protect immigrants from being separated from families after criticism arose that some local jurisdictions were jailing immigrants as a revenue source, billing the federal government for services and also potentially violating international human rights accords, the Washington Post reports. Some were exported without notification to family members, resulting in people disappearing with no explanation. Civil liberties groups also called this a means of racial and ethnic profiling.  Most were picked up for minor traffic violations and had no criminal records.

Federal courts did order the deportation of some 415,000 people from 2011 through 2013—and some sanctuary cities are cooperating with federal authorities to export violent offenders.

Of those being protected in sanctuary cities, some are awaiting immigration hearings and others have applied for asylum after overstaying visitor or student visas.  Asylum is sought when an immigrant’s life would be in danger or the immigrant would face persecution if they returned home.

Duncan Hunter is doing a great job for the 52nd district. Thank you Congressman Hunter!