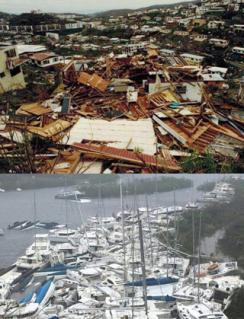 Photos:  Hurricane damage in the Caribbean, courtesy of Organisation of Eastern Caribbean States

September 7, 2017 (San Diego) – The Organisation of Eastern Caribbean States (OECS) has issued a report on devastating wrought by Hurricane Irma, a powerful category 5 hurricane that smashed into multiple Caribbean islands and is now on track to hit Florida this weekend. Evacuations are ordered in every Florida county.  The storm could also veer north after Florida toward Georgia and the Carolinas.

The storm has been clocked with maximum sustained winds of 185 miles per hour, one of the strongest ever recorded.  Puerto Rico, a U.S. territory, was spared a direct hit, but did have winds up to 75 miles an hour.  But many Caribbean states suffered catastrophic losses from winds as well as storm surges up to 20 feet and torrential rains.  Several deaths have also been reported.

On Anguilla, 90% of roads are impassable and 90% of utilities have been wiped out, as well as 90% of utility infrastructure plus damage to the airport, hospital, schools and fire stations.

Barbuda and Antigua reported major roof damage, uprooted trees and power poles down. The British Virgin Islands reports major damage to homes and commercial businesses. Dominica had flash flooding.  Power on Monserrat was shut off as a precaution, but there were no damages reported as of last night.  Power is disrupted on St. Kitts and Nevis, where some homes suffered damage.

The hurricane is expected to reach Hispaniola tonight, the Bahamas tomorrow, followed by Cuba and Florida.

The National Weather Service has a hurricane in effect now for southern Florida for what it describes as a “dangerous major hurricane” and “life-threatening storm surge” over at least the next 48 to 72 hours.

Florida’s Governor has issued a mandatory evacuation notice and a blunt warning to “get out now” since roads and bridges are expected to flood, trapping residents who don’t leave immediately.

East County Magazine has received reporters of stranded travelers in some areas including the Bahamas being charged exorbitant rates for airline tickets to get out before Hurricane Irma strikes. If you have been price-gouged by airlines, please notify editor@eastcountymagazine.

There isn't much coverage about the danger to areas of Cuba. I'm surprised because of the cultural and family ties between Florida and the island nation.
CNN just interviewed a man and his son who stated they are staying in their home in Miami Beach because they believe they will be safe there. Good luck with that.