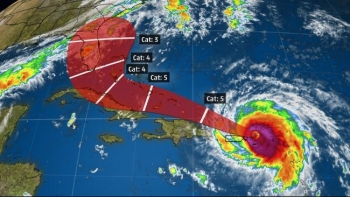 September 6, 2017 (San Diego’s East County) - On the heels of Hurricane Harvey, Hurricane Irma is now wreaking havoc in the Caribbean and is heading toward the U.S. mainland.

Irma is the strongest hurricane ever recorded in the Atlantic, with wind speeds of 185 miles per hour. It slammed into the U.S. Virgin Islands as a category 5 hurricane, and is also soon expected to ravage Puerto Rico, a U.S. territory and other Caribbean islands.

The devastating storm is on track to slam into Florida this weekend as a still strong category 4 hurricane.  Authorities have urged Florida residents to evacuate, emphasizing that Irma is one of the most damaging storms ever to strike U.S. soil.

The storm could still shift to cause serious damage farther north along the Eastern seaboard or head into the already ravaged Gulf of Mexico, potentially targeting Gulf States yet again.

Climate change is causing ocean waters to warm to the hottest levels on record, fueling these extreme storms. Across the world, India, Pakistan, and Africa have all had devastating flooding in August and September, while in California and across the west, the worst wildfire season on record is taking a devastating toll on cherished landmarks such as Yosemite National Park and the Columbia Gorge River Valley, as well as urban centers such as Los Angeles.

The Trump administration’s denial of climate change and appointment of climate change deniers to head up the Environmental Protection Agency and NASA, which including the National Weather Service, assures that no actions are likely to be taken to slow or halt climate change.

That means the U.S. policy will be limited to battling wildfires and cleaning up after disasters such as Hurricanes Harvey and Irma rob thousands, or even millions of their homes while failing to take any actions to prevent such catastrophic events from occurring in the future.  That’s akin to aiding crime victims, while turning a blind eye to crime prevention.

Hurricane Irma is the second continuous hurricane after hurricane Harvey and probably the most destructive one. Florida is USA is the state which receives the largest hurricane and storms all over the season, so people living there need to be more proactive and need to protect their belonging almost all the time in a year. One of the easiest and effective way of protecting home is by the installation of hurricane windows and doors (http://stormguardwindowanddoor.com/miami-impact-windows-doors/). The hurricane shutters protect the home with a high strength and gives the ultimate covering from heavy winds, debris as well as from unwanted entries too. People have agreed in large extent with the fact that hurricane shutters do protect the home from being damaged.