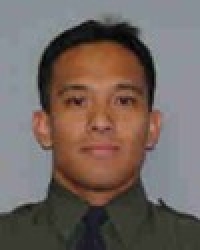 May 16, 2015 (Jacumba) – A bridge over Interstate 8 near Jacumba has been renamed to honor Eric Norman Cabral, a Border Patrol Agent who died of a heart attack caused by heat exhaustion suffered while tracking a group of suspected undocumented immigrants in the area.

He was found unresponsive and flown to a local hospital, where he later died. He was 31 years old. His untimely death points up the risks facing those who patrol our borders in often extreme weather conditions.

His family asked Assemblyman Brian Jones to introduce legislation to name the bridge in Agent Cabral’s honor.  That measure was signed into law by Governor Jerry Brown.

A ceremony was held May 15th to unveil the new freeway bridge signs, with representatives from the Border Patrol, the Border Patrol Union, and Assemblyman Jones present to honor the memory of Agent Cabral.

I don't know of any bridge over Interstate 8 near Jacumba.