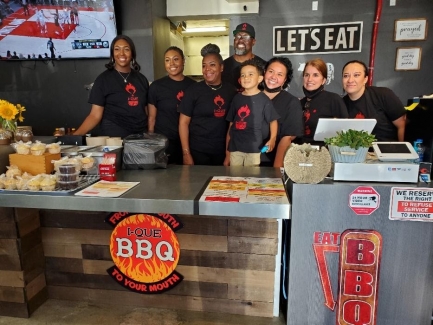 By Henri Migala
Photo, left:  owners and employees at I-Que BBQ, by Miriam Raftery
June 18, 2021 (La Mesa) -- Very few things are better than really, I mean REALLY, good barbecue. And one of those things is really good barbecue served by delightful, engaging and endearing people. That’s exactly what you get at La Mesa’s newest barbecue restaurant, I-Que BBQ.
Located at 8733 Broadway in the small strip of shops near I-HOP, at the juncture of Spring Street and Broadway close to the SR-125 and SR- 94 interchange, I-Que BBQ enjoys a prime, convenient spot for both motorists and residents. 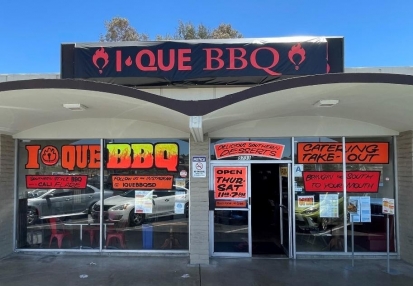 Photo, right by Henri Migala: I-Que BBQ offers Southern-style barbecue with California flair
From his earliest memories, co-owner Tyrone Hopkins said cooking was part of his family and in his blood. His mother was a chef in Atlanta; he started to learn how to cook barbecue in Georgia when he was 2 or 3 years old, with his dad in the backyard. They would cook all day, but the food wouldn’t be ready until the next day.
Tyrone brings his knowledge and experience from Georgia into the barbecue he makes. The secret to his savory barbecue sauce?  Brown sugar and vinegar.
But that’s not the entire recipe for success.
Tyrone’s business partner and co-owner, Naomi Preciabo, brings her experiences from North Carolina into the mixt to complement Tyrone’s Georgia influence. Naomi grew up in North Carolina, where her father was stationed as a Green Beret at Fort Bragg, and in Panama, where her mother is from and her father was stationed.
An Academic Beginning
Naomi and Tyrone knew each other long before they ventured into the barbecue business. They worked together at Horizon Christian Academy in San Diego, where Naomi taught Spanish and Tyrone served as the dean of students and boys’ basketball coach.  Under his leadership, the team won the Division 5 State Championship in 2013.
When the school closed in 2017, Naomi and Tyrone explored other options, until they came up with the idea of starting a barbecue restaurant. Because of Naomi and Tyrone’s academic backgrounds, they came up with the wonderfully creative name I-Que (IQ) BBQ. Still educators at heart, their original idea, and still their plan, is to offer tutoring at their restaurant for students.
They took ove 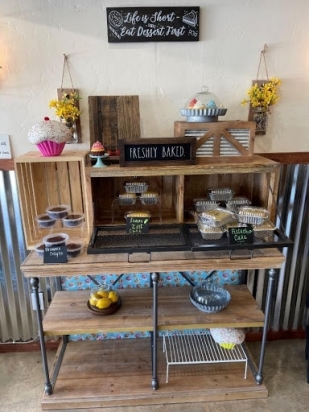 r their current location in February 2020 with the expectation of opening in May or June, but then the pandemic hit and everything closed in March last year.
But that didn’t stop Naomi and Tyrone. They moved their operation to Naomi’s house temporarily, where she cooked and baked in the kitchen and Tyrone slept on a cot in the backyard to watch over the BBQ that had to cook all night. They sold barbecue from her front yard and offered catering services. “People would drive by and pick up their barbecue,” recalled Naomi. Business from local churches kept them above water.
Photo, leftt by Henri Migala: sign above homemade dessert display reads “Life is short: Eat dessert first.”
“The La Mesa Community is Amazing!”
When they finally were able to open in January, Tyrone recalls, “There were 150 people lined up, waiting outside before we were even open. Some people waited for over an hour.”
Earlier this month, the La Mesa Chamber of Commerce hosted a ribbon cutting to welcome I-Que BBQ to the community. 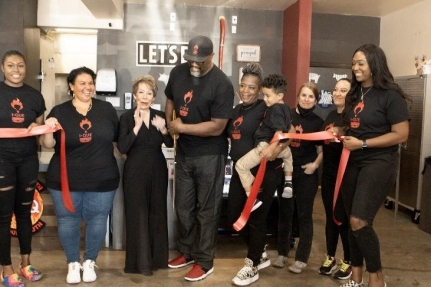 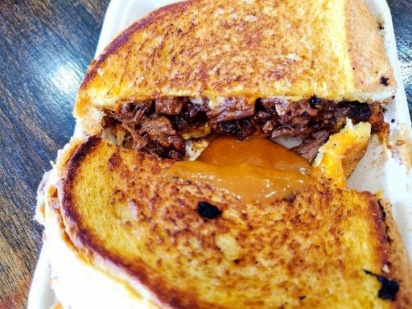 When it was time to order, I asked what I have to taste that I can’t find anywhere else. I asked them for something that will make me want to keep coming back, over and over.
They recommended the Southern Hospitality Grilled Cheese with brisket burnt ends. OMG! It would be impossible to exaggerate how absolutely and totally delicious it is! It’s a large sandwich, with buttered bread grilled literally to perfection (at least just the way I like it), with melted cheese and a full amount of exquisitely cooked, tender burnt brisket tips inside.
When my brothers visit me from Texas, I like to take them to places where they can eat things they can’t find back home. Although Texas is known for its barbecue, I will be taking them to I-Que BBQ just to have the Southern Hospitality Grilled Cheese with brisket burnt ends.
And my impression of I-Que BBQ is not unique. A quick look on Yelp shows that they have only 5-Star reviews from all their patrons. A sampling of comments include:
“This might be the best BBQ in all of San Diego.  The service and atmosphere are top notch, and the prices are totally fair. The best part is the food though, as it should be.”  Scott
“They have the best overall selection of true southern BBQ I have had in San Diego. Brisket is top notch, greens were delicious, ribs are incredible!! Mac n cheese was absolutely amazing. I have been several times and it never disappoints! “ Eden
“Sooo soo good. Dirty Mac and Cheese. Coming back for moreeeeeeee. Will be having my family come and taste some deliciousnesssssssss!” Yvette 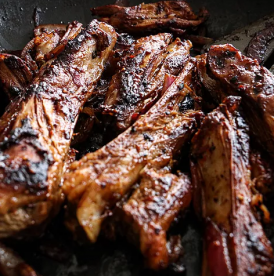 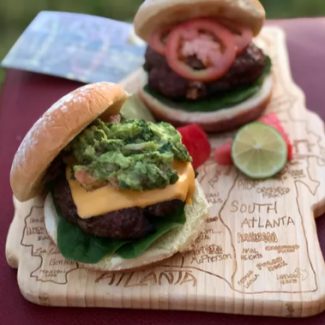 The menu includes barbecue staple such as brisket, pulled pork and ribs as well as innovations such as Durty Burgers, a mix of ground sirloin and ground pork sausage topped by guacamole and served with a slice of lime.
“We Want People to Leave Happy”
“We’re community type of people,” said Tyrone. “We love people. We love Christ first, but we love people. When people come here, we want people to leave happy.”
Much as I strive to eat more plant-based foods, I-Que BBQ is precisely the kind of place that will make sure I could never be a full vegetarian.
As much as I totally loved the exquisite barbecue, I also enjoyed meeting and visiting with Naomi and Tyrone as much. They are warm, kind, inviting and graciously welcoming-- and that’s the feeling you get from all their staff and the whole restaurant. 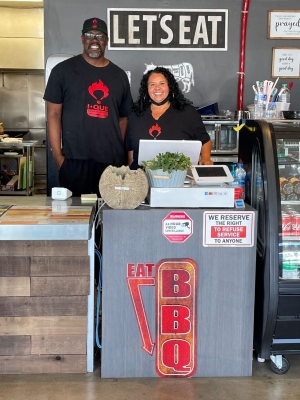 I-Que BBQ is a great place with great food and great people. What more could you ever ask for?
Feast your eyes on their full menu at https://www.iqbbqsd.com/.