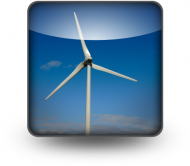 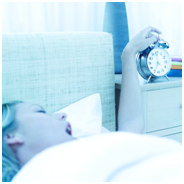 What happens if neighbors complain of noise?

In Fairfield, New York, weary residents asked town officials to measure noise levels at Iberdrola’s Hardscrabble wind facility. The results found levels above the legal limit of 50 decibels. But instead of reducing the noise, Iberdrola gave noise generating machines to residents in hopes of drowning out the whooshing and whirling turbine sounds. Note: The machine is set at the lowest setting in this audio link.

"It's torture. You cannot sleep with this frequency of noise,” resident James Salamone said of living just 1,500 feet from the nearest turbine.  The noise machine did not work, he told WKTV.

Another resident likened the noise to the sound of a plane that never stops.

Iberdrola has said that as a long-time community partner, it is working with neighbors to solve the problem.

On July 13, the town's council voted unanimously to test the equipment--and under the resolution adopted, if the problem is not resolved in Fairfield by September, town officials have the right to pull the plug and order individual turbines—or the entire project—shut down.

“Is this what we all have to look forward too?” asked Parke Ewing, a resident in the quiet desert town of Ocotillo, where Pattern Energy is building a similar wind energy facility just 1,500 feet from the nearest homes. “Residents receive complimentary noise machines from wind turbine developer...I've heard it all now.”

Fed-up Fairfield residents, meanwhile, have come up with a satirical "ad" of their own for the "Iberdrola Turbine Drowner": 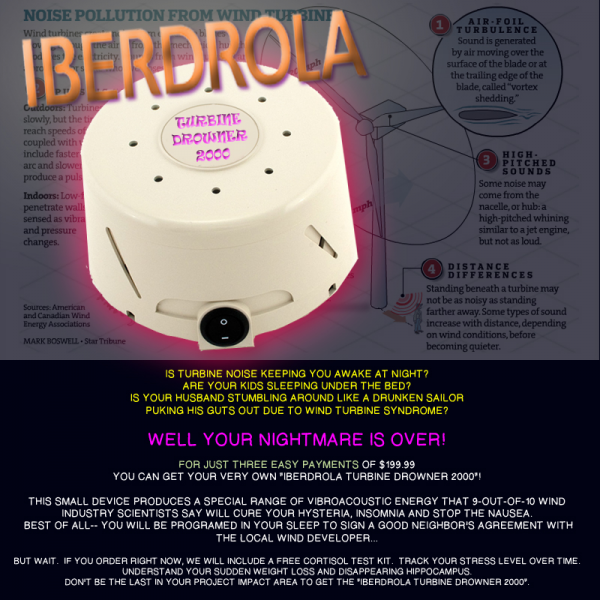 Only an arrogant wind developer such as Iberdrola would try to make citizens believe that adding noise to alleviate noise is a viable solution. What gall.

This Spanish conglomerate, funded by Qatar and the United Arab Emirates, does not care about how its product impacts human beings’ health, property values or quality of life. They are in this for the money. Period. They’ve exhausted the resources and subsidies in Spain and publicly stated that they would take their show on the road, pilfering money from-- and laying waste to-- countries like America, which have not yet learned their lesson the hard way.

Unless we stand together and oppose these projects—individual local projects and those across the country—we will be forced to endure whatever impacts these projects impose.

I personally know people who have abandoned their dream homes because they could not abide the high and low frequency noises and worse…the ‘unheard’ infrasound put out by these machines. Such ultra-low frequency waves cannot be detected by the human ear, but they resonate within homes and within our bodies. I personally know people who have built ‘family bedrooms’ in their basements in an attempt to escape the noise and enable them to rest at night. I personally know people who have become sick, who are depressed, and who can’t work outside their homes while the wind is blowing. And those human conditions are only a small part of the ‘wind’ story. It’s a travesty…but we’ve allowed it, by allowing ourselves to believe the sales pitches we’ve all heard from the wind industry without asking common-sense questions (and requiring factual answers). THEY know it’s not a viable solution to our energy needs. How could it be? It can’t stand alone, can’t compete without massive subsidies which come in multiple forms, can’t ever be counted on, and causes a domino effect of needing huge transmission upgrades just to allow our grids to respond to wind’s many vagaries.

I encourage readers to research this complicated and multi-faceted topic and get the facts for themselves. Science, economics and ethics do not support industrial wind development of the type planned out by these large multi-national LLCs.

In my backyard, here in the pristine mountains of rural western Maine, Iberdrola has refused to meet with the public to answer questions about its proposed project. Instead, they have surreptitiously attempted to meet privately with dissenters, tried to buy out locals who will be most impacted, and have stated their concern isn’t with the members of the community which will have to live in the middle of its facility. They say the land owner (Plum Creek, based in Seattle) can do what they want to with their land. WE say if the impacts of the project were confined to the property’s borders, the conversation would be different…but those impacts won’t be. All who live, work and recreate here will be made to suffer the effects.

More than eighty percent (80%) of Lexington residents have signed petitions stating they are opposed to Iberdrola’s industrial wind development. Iberdrola says…so what? They seemed convinced that mere citizens are powerless to stop them.

THAT is the company which so sympathetically offers noise machines to mitigate 20 years of sleeplessness and distress.

Please get the facts. Get them from independent sources and from people who actually live in or near a wind development. And then, do what Iberdrola’s own government did. Invite them to take their shoddy product and leave.

Anything to implement so-called "green power."

Damn the the wilderness, the hundreds of thousands of acres of beautiful, open space.

Damn the plants and animals--many of them endangered--that live there.

Damn proper stewardship of the land and respect for political procedure, due diligence, and property rights.

Damn economic common-sense and the mountains of evidence showing wind farms to be entirely inadequate to modern energy needs. And finally,

Anything to remain loyal to the ideology--the myth--of renewable wind power.

PS--And as far as Iberdrola is concerned, anything to make a buck.