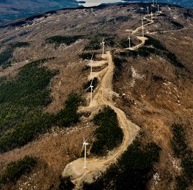 March 26, 2014 (San Diego’s East County) –Last week, we reported  on the latest in a string of fires at Iberdrola wind facilities, last time at a Pennsylvania site. Some involved turbines made by Gamesa, in which Iberdrola owns a controlling interest.  Fires have occurred with other Gamesa turbines at additional sites.

Meanwhile in  New Hampshire, ECM has learned that State Fire Marshal Rob Anstey has accused Iberdrola of violating fire safety codes and lying to an oversight committee about the Fire Marshal’s requirements at its Groton Wind facility. The Fire Marshall has announced that he may issue a stop work order to shut down the facility.

That should spark concern here in San Diego, where Supervisors and the federal government recently approved Tule Wind, an Iberdrola wind project slated to go into a region prone to cstastrophic wildfires including the 2007 Harris Fire, which was fueled by 100 mph hurricane-force winds. Campgrounds are located in McCain Valley, where Iberdrola aims to line the only road in and out with wind turbines, each filled with hundreds of gallons of flammable lubricating oil.  Former Cal Fire Batallion Chief Mark Ostrander has warned that firefighters can't fight fires under a flaming turbine whirling off debris, and aerial drops won't work at heights above 300 feet. The turbines are 500 feet, so firefighters would have to wait for the fire to burn outside of the wind facility, which could result in a firestorm that could burn into urban San Diego areas, he has warned.

The Fire Marshal said Iberdrola failed to submit plans to his office for review and failed to comply with fire safety requirements. Among other things, the Fire Marshall had mandated an automatic fire suppression system that would be installed to cover the individual hazard areas such as the bearing oil and transformers.

Iberdrola has demonstrated a reckless disregard for New Hampshire’s rules and its residents,” said Lori Lerner, President of New Hampshire Wind Watch, a citizens’ group focused on the impacts and costs of large-scale wind in the state, the watchdog site Iberdrola Watch reported. “The NH Attorney General, our State Fire Marshall, and numerous members of the public have called on the SEC to require Iberdrola to correct the violations or order that project operations stop.”

ECM has contacted the NH State Fire Marshall to request an update on this situation and will report back when we receive a response.

Hardly surprising. The entire industry is based on lies. They probably figure, what's one more?