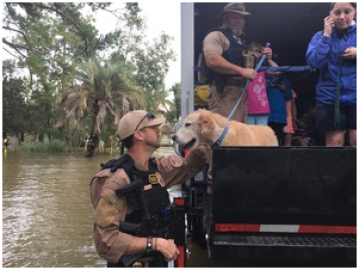 August 31, 2017 (San Diego) -- U.S. Immigration and Customs Enforcement (ICE) has deployed approximately 200 law enforcement personnel from Rapid Response Teams (RRTs) and Special Response Teams (SRTs) around the country, including San Diego, to provide security for search and rescue teams and to assist with search and rescue operations in Southeast Texas in response to Hurricane Harvey.

About a dozen additional non-law enforcement ICE employees are also on their way to Texas as members of the U.S. Department of Homeland Security’s (DHS) Surge Capacity Force (SCF) to assist the Federal Emergency Management Agency (FEMA) with hurricane relief efforts. ICE anticipates that several dozen more employees will eventually be deployed.

A press release from ICE states, “In light of the hurricane, ICE’s highest priorities are to promote life-saving and life-sustaining activities, the safe evacuation of people who are leaving the impacted area, the maintenance of public order, the prevention of the loss of property to the extent possible, and the speedy recovery of the region.”

During the 2007 Harris wildfire in San Diego’s East County, some undocumented residents in need of evacuation assistance were fearful of ICE agents sent to do the job and did not come out of their homes, this reporter was told by a citizen who went back to help his neighbors after ICE officials left.

But ICE’s press release issued today states, “Immigration enforcement operations are not being conducted at evacuation sites, or assistance centers such as shelters or food banks.”

ICE Acting Director Thomas D. Homan says, “I’m extremely proud of the men and women of ICE who have stepped up to provide life-saving assistance to those in need. I have the utmost admiration for those who volunteer to forgo the comfort of their homes and families to help others in distress.” 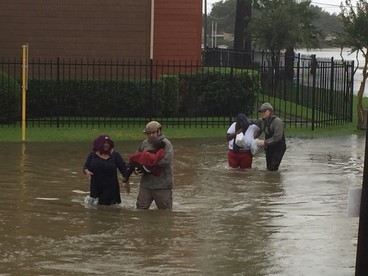 Conditions on the ground are extremely difficult, including polluted flood waters and an inability to reach everyone who needs assistance, according to Special Agent Dan Rasmussen from ICE’s Homeland Security Investigations (HSI) office in Houston and the commanding officer of Houston’s RRT. He and his members have rescued over 100 people in distress using a repurposed military vehicle and a Ford F-250 pickup truck. “When they thank you for getting them out of that situation it’s very rewarding,” Rasmussen said.

“I couldn't be more proud of our teams responding to Hurricane Harvey. These officers dropped everything and drove cross country to help in any way they could,” said Caleb Vitello, ERO SRT unit chief. “They knew they were going to be in extremely hostile conditions, working long hours, sleeping in their cars, and eating MREs. Even knowing this, literally every team was knocking down my door requesting to be the first one deployed.”

“There’s no telling how long they're going to be out there or what they're going to face but every one of them is committed to do whatever it takes to help the victims of this disaster,” Vitello said.

Each team, comprised primarily of HSI special agents and Enforcement and Removal Operations (ERO) officers, has as many as 25 specially trained, volunteer members who may be activated to provide disaster assistance when requested by FEMA.

Additional RRTs and SRTs made up of personnel from various ICE offices are preparing to be deployed.

View more photos and read the story on ICE.gov