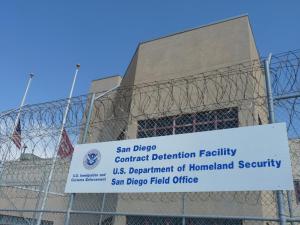 The detainees’ family members and local community leaders have said that the detainees’ fled ISIS, which sought to force Christians to convert to Islam, die or be enslaved. Papers are not being processed in Iraq and for some, the only way to escape and reach America was to use false identification, sources in the Iraqi community have told us.

ECM has asked whether the individuals facing deportment will be sent back to Iraq, where their lives could be at risk, or to some other nation. We have not yet received a response.

Iraqi Chaldeans we spoke with at the rally, including Father Noel, Mark Arabo and family members, told us that all of the Chaldean detainees have family members here in San Diego and East County who are willing and eager to take them into their homes.  Those detainees claim to have fled ISIS and fear for their lives if ordered to return.

We asked for records on the Chaldean detainees.  Mack said in order to view records or interview detainees at Otay, the detainee (s) would have to first sign a media privacy waiver form.  If you have a family member detained who would like to speak with East County Magazine and allow us to review their case records, please ask them to fill out this form. Signing the privacy waiver form would also allow our media outlet to share files with members of Congress.

We asked Congresswoman Susan Davis and Congressman Duncan Hunter for comments on the Chaldean detainees.  Rep. Hunter’s office has not yet responded.

However Rep. Davis issued this response to East County Magazine’s inquiry today: “"My office has reached out to U.S. Immigration and Customs and Enforcement (ICE) regarding the Chaldean detainees. ICE has assured our office that they are being processed. However, these cases exemplify the need for comprehensive immigration reform to fix a broken system. Unfortunately, because of privacy rules, we are unable to find out about each case. If a member of their family who resides in our district would like us to check on their family member, we would be happy to work with them directly.”

Mack also provided the following statement from ICE regarding those who remain detained:  “Decisions regarding whether individuals will be detained while their immigration proceedings are pending are made solely by the Department of Homeland Security following a comprehensive review of each case. In making such determinations, ICE weighs a variety of factors, including the person’s conviction record, immigration history, ties to the community, risk of flight, and whether he or she poses a potential threat to public safety,” she said, adding, “All individuals who come into ICE custody receive due process and access to the immigration courts under the jurisdiction of the Department of Justice’s Executive Office for Immigration Review (EOIR).”