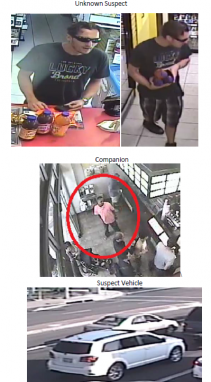 October 7, 2017 (Santee/La Mesa) -- San Diego County Crime Stoppers along with investigators from the Santee Sheriff’s Station are asking for the public’s help in identifying and locating a man wanted for identity theft.

The victim from Santee never lost her credit card and does not know how her information was compromised.

On August 21 and August 22, 2017, a man used the victim’s credit card number to make about $900 in unauthorized purchases at the Shell Gas Station located at 5302 Lake Murray Boulevard in La Mesa, the Sarku Japan restaurant at the Fashion Valley Mall and at the Travel Mart in Mission Valley.

Surveillance video from the Shell Gas Station shows the suspect getting into the backseat of a white SUV when he left the area. There appeared to be two more people in that vehicle.

According to the clerk at the Travel Mart, the suspect was accompanied by a Black male adult during the purchases made at that business. The clerk also said that the white male presented an out of state, pink colored, driver license. Surveillance video from the restaurant,

Sarku Japan confirmed the suspect was with a Black male adult during the transaction.

The suspect is described as a White male, 20 to 30‐years‐old, with short brown hair. He was unshaven and was last seen wearing dark sunglasses, a dark “Lucky Brand” t‐shirt, plaid shorts and dark “skater style” shoes.

The companion is described as a Black male adult with short hair and was last seen wearing a pink collared shirt.

The vehicle is described as a white four‐door SUV.

Crime Stoppers is offering up to a $1,000 reward to anyone with information that leads to an arrest in this case. Information on how to send anonymous emails and mobile app tips can be found on our website www.sdcrimestoppers.org.