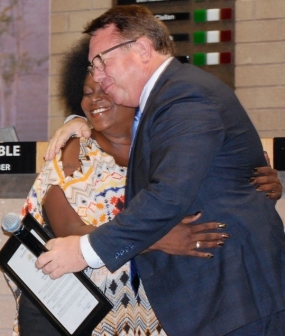 August 10, 2017 (El Cajon) -- On Tuesday, Iesha Booker, an MTS worker who aided a fallen police officer, was given a commendation at the El Cajon City Council meeting in front of a packed Council chamber and half a dozen news crews.   After a suspect beat the officer unconscious at a KFC restaurant, Booker used the officer’s radio to summon help, as ECM reported.

Police Chief Jeff Davis thanked Booker on behalf of the police force, saying, “The actions you displayed that day demonstrated a tremendous amount of courage and compassion. You always have the admiration of myself and every member of the El Cajon Police Department.”

Upon learning that Booker, a mother of seven children, has been homeless, the El Cajon Police Officers  Association helped the family get into a temporary shelter and set up a Go  Fund Me page that so far, has raised over $32,000 to help them.

“Whereas Iesha Booker had the courage, quick thinking and willingness to get involved and without hesitation and regard to her own safety summoned immediate help for the injured officer and attempted to comfort him, now therefore Bill Wells, Mayor for the City of El Cajon, together with the City Council, do hereby commend Iesha Booker for her selfless act of kindness, quick thinking and service to the community and further extend our appreciation to her for her displaying great valor and courage during this incident,” read Monica Zech, El Cajon’s Public Information Officer.

Mark Weinstein, Area Vice-President of First Transit flew in from San Francisco for the ceremony. He stated, “You did a wonderful thing for the community… and I wanted to be present to say thank you for what you did.”

Booker was visibly awe-struck by the red-carpet welcome and standing ovation and spoke humbly, through tears. “I just want to thank everybody for the donations, the recognition. Just thank God for everybody, I really appreciate it, my kids appreciate it, and you’re welcome.”

He concluded, “I feel in my heart that most people are good people. They’re law abiding people they appreciate what the police do for them and it’s hard for us to show them that but you had the opportunity and you helped save the life of one of our own. There’s no proclamation that we could give you that could tell you how thankful we are for what you’ve done. God bless you and thank you for everything.” 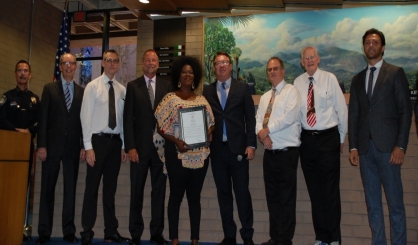