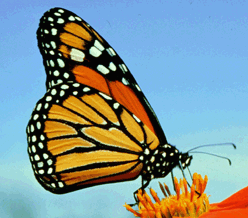 Public asked to plant Milkweed to save Monarch Butterflies;

February 17, 2014 (San Diego’s East County)--Monarch butterflies in abundance filled the air and gardens in San Diego County for as long as anyone can remember.  These colorful butterflies migrate over 2,000 miles to winter in Southern California and Baja Mexico. The great mystery of how generations of Monarchs find their way south over such vast distances may never be known.

But this year, the numbers of Monarch butterflies reaching Mexico have reached an all time low—down an alarming 90 percent, the World Wildlife Fund has just announced, the Los Angeles Times reports.  How can this be?  One factor stands out: loss of Milkweed.

Corn and wheat crops genetically modified with weed killers have decimated milkweed by 80 percent across the U.S. Midwest—and farmers in other Monarch habitat areas are also planting the deadly crops.

Deforestation and urban expansion are also likely contributing to the Monarchs’ decline. Two years of unusual springtime weather is another enormous factor.  But one thing is certain: without Milkweed, the Monarch cannot survive.

The Monarch or Milkweed butterfly can feed off other plants like California Milkweed, Swamp Milkweed, Butterfly Weed, Horseweed, spotted Joe-pie weed and Indian Hemp, but its larvae must live in Milkweed.

All along the coast from Canada to Mexico more and more farmers are planting genetically modified crops.  These seeds grow plants that are resistant to certain weed killers so the farmer can spray his crops with an herbicide and his plants will survive but the weeds will die.  That includes Milkweed.

The use of Genetically Modified crop seeds increases the farmers yield.   The use of Roundup Ready corn and soybean seed from Monsanto has decimated the Milkweed.

The Monarch butterfly has so decreased in numbers that its winter habitat in Mexico shrunk from 45 acres in 1996 to 1.7 acres in 2013.

What is the solution?  Butterfly advocates are hoping the industry will get behind campaigns to get people to plant more Milkweed.  Imagine that.  Deliberately growing weeds.

However the short scrubby weeds with the milky juice and stubby flowers offer the best hope way to preserve everyone’s favorite butterfly.

Who can forget the magic as a child of watching a caterpillar weaving its cocoon and transforming to the magnificent Monarch before your very eyes?

In addition to the efforts of individuals, environmentalists are also clamoring for the governments of North American nations to take action. In March, President Barack Obama is set visit Toluca, Mexico, not far from the Monarch preserve, to meet with Mexican and Canadian presidents. The Washington Post reports that Omar Vidal, director of the World Wildlife Fund’s Mexico office wants North American leaders to agree on a plan to protect the monarch, saying the migration “symbolically unites our three countries.”

If you would like to help, look for milkweed seeds native to California and San Diego County at local nurseries to attrach Monarch butterflies to your garden.  A minimal donation ($1 for 50 seeds) is requested but if you can’t afford it, they will send you seeds anyway. Monarch Watch will also mail milkweed suitable to our region; to order or get more information, click here.

You can also volunteer to participate in the annual Monarch Butterfly count, held on the West Coast each Thanksgiving by the Xerces Society.

There is also an online petition callign on Monsanto to pull its herbicide linked to butterfly die-offs from the market:  http://action.sumofus.org/a/monsanto-is-killing-the-monarchs/?sub=taf

East County Magazine is a publication of the 501c3 Heartland Foundation and United Green.