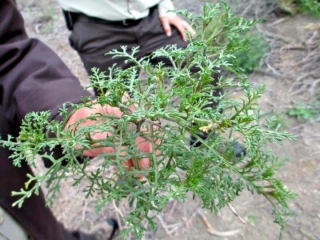 June 5, 2019 (San Diego) - The County of San Diego has received a $53,966 state grant to continue efforts to corral a native plant-threatening, fire hazard-creating invasive weed that even Australian cows don’t like.

Ward’s weed has taken over rangelands in Australia and is threatening to invade North America starting in San Diego County, which is home to fragile ecological habitats like coastal sage scrub.

County Agriculture, Weights and Measures officials hope the two-year $53,966 grant from the California Department of Food and Agriculture will supplement existing funding and possibly push efforts forward—from suppressing the weed to eradicating it.

Ward’s weed made local news recently because groups are working to control the largest infestation in Carlsbad. However, the County and other agencies have been working to contain the weed for a few years.

"These plants add a lot of pressure on native habitats, dispacing or crowding out other plants and affecting the fitness of the habitat."

Two areas in Carlsbad, one at Crest Canyon in Del Mar, one in Otay Mesa and one on Camp Pendleton are the only known infestations in North America. Agriculture, Weights and Measures has been working since 2015 to control dozens of acres where the weed has taken root and threatens native habitat, using funding from the San Diego Association of Governments.

Native to the Mediterranean and southwest Asia, Ward’s weed is bristly haired with yellow or white flowers. It can grow vertically like a tumbleweed in rainy years or flat like a mat in dry ones. It spits out tens of thousands of seeds, and it grows and dies each year, sucking up space from native plants, then leaving a dry, brittle carcass as a fire hazard.

The weed has become a serious invasive threat in Australia, where it’s damaged rangelands. According to the Australian state of Victoria’s agriculture department, livestock won’t eat the weed unless there’s nothing else to eat and they are put off by the weed’s “hairiness and pungent, penetrating odor.”

The worry in San Diego County is that if Ward’s weed becomes permanently established, it could crowd out native habitats. Jason Giessow is the principal ecologist of Dendra, Inc., the contractor working for Agriculture, Weights and Measures on invasive weed abatement.

“These plants add a lot of pressure on native habitats,” Giessow said, “displacing or crowding out other plants and affecting the fitness of the habitat.”

Getting rid of Ward’s weed is difficult. Mark Martinez, a supervising pest management technician with Agriculture, Weights and Measures, said the weed likes to grow up intertwined with other plants. Giessow said each weed not only sets thousands of seeds, it withholds some seeds to spread out germination.

Giessow said the public can help, by knowing what Ward’s weed looks like and then, if they find it, snapping a picture and reporting it to Agriculture, Weights and Measures at IPC.AWM@sdcounty.ca.gov or at (858) 614-7750, or on apps like inaturalist.org or calflora.org.

Start a story line: Smokers, this plant is better than hemp aka cannabis aka Merry Wanna, and watch it disappear.