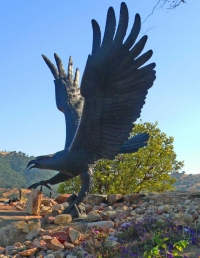 The letter states, “We felt confident that our business, operational, and regulatory structure strategies are agreeable to all relevant stakeholders.”

Modifications have begun on the former casino, which will be renamed the Santa Ysabel Botanical Enterprise Facility. These include building interior security doors and secure rooms, security cameras additional renovations.  Infrastructure repairs and landscaping upgrades are also underway or planned.

The tribe’s letter states that the leadership is “very excited” about the new venture.

But not everyone in the tribe supports the cannabis cultivation plan.

June Sortore, a tribal member who has been at odds with the tribal leadership on a variety of issues, has this to say. “I believe this would generate great revenue. My objection is the tribe will not allow member to grow their own medicinal  cannabis herbs, even when prescribed by a physician. The tribe bars members from employment if drug tests come out positive for cannabis.”

She adds that tribal police look for pot-growing at private residences to enforce the ban. Sortore views the tribe’s announcement that it will grow and sell medical marijuana hypocritical.

The tribe’s actions come after the U.S. Justice Department in January issued a policy statement offering guidance to U.S. Attorneys on priorities for enforcing marijuana laws on tribal lands. The statement made clear that enforcement must require consultation with tribal partners.

“The tribes have the sovereign right to set the code on their reservations,” stated Timothy Purdon, U.S. attorney for North Dakota and chairman of the Attorney General’s Subcommittee on Native American issues, U.S. news reports.

The federal statement appears to allow tribes that wish to grow marijuana for legal purposes to engage in cultivation, provided they don’t trigger one of the eight enforcement guidelines.

Those triggers include distributing marijuana to minors, funneling revenues to criminal enterprises such as cartels or gangs, diverting marijuana to states where use remains illegal, using marijuana activity as a cover for other illegal activity, using firearms in cultivation or distribution of marijuana, drugged driving, or growing marijuana on public lands.

But the Justice Department statement warns that nothing in the statement “precludes investigation or prosecution” so some ambivalence remains.