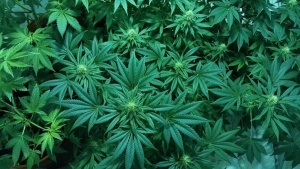 Detectives from the San Diego County Sheriff's Department's Special Investigation Division, with the assistance of Deputies from the Fallbrook and Valley Center Crime Suppression Teams, Rural Command and members of the Special Enforcement Detail served the search warrant as part of an investigation by Sheriff's Detectives of illegal marijuana cultivation and sales in San Diego County.

San Diego County's Code Enforcement, investigators from the California Water Board and San Diego Gas & Electric also assisted in the operation. They discovered numerous violations creating a dangerous situation, as well as environmental-related crimes happening on the property due to the illegal cultivation.
According to the Sheriff's department, it is not uncommon for investigators to find dangerous chemicals, illegal pesticides and other hazardous materials used at unlicensed marijuana grow sites. These dangerous materials may enter the local groundwater supply and streams, creating extreme environmental hazards.
Marijuana cultivation sites such as these are often the source of products unsafe for human consumption, which are sold at illegal dispensaries in our communities.  Investigators believe the marijuana at the Warner Springs grow site was destined for unlicensed Southern California pot shops.
The warrant follows community concerns about illegal marijuana operations near schools and residential areas.