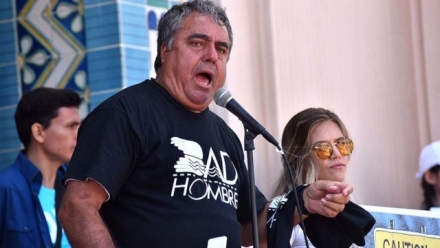 By Chris Stone, Times of San Diego, a member of the San Diego Online News Network

April 19, 2020 (San Diego) - Among Gov. Gavin Newsom’s indicators to be used before stay-at-home orders can be eased (and the economy reopened) are testing and contact tracing.

But what if California’s 2 million undocumented immigrants are too fearful to be tested?

“Do they trust that … they can go someplace and get tested when they have been lied to so many times by this [Trump] administration?” said Enrique Morones, director and founder of Gente Unida, a human rights organization. “They aren’t going to trust.”

While reports indicate that African Americans have proportionally higher and more severe cases of the coronavirus, the Latino population is hit just as hard, Morones said.

Contributing to the higher infection rate may be that undocumented laborers in agriculture and in other lower-paying jobs continue to work in the community, he said, and Latino culture tends to be more “touchy,” with hugs and kisses.

“You have a lot of people in some of the low-income areas for example here in San Diego where they don’t know what to believe,” said the former director of Border Angels. Reading both Spanish and English language newspapers, “They hear some people say confusing information.”

A very clear message in both languages is needed about what should be taking place, he said.

Morones pointed to a March 25 statement by Puebla Gov. Luis Miguel Barbosa, quoted by CNN as saying of COVID-19 victims: “The majority are wealthy people, you know? If you’re rich, you’re at risk, but if you’re poor, no — well us poor, we are immune.”

What needs to happen, Morones said, is for trusted members of local communities to present health information, accompanied by medical personnel offering testing and ways to stay healthy.

This would allow immigrants to garner accurate information in a trusted environment with community leaders they have faith in, he said.

Immigrants also are often targeted by scammers who see them as easy targets, Morones added.

While he commended Newsom for his recently announced fund to help meet health needs for undocumented people, more is needed, he said.

“It’s wonderful that Gov. Newsom is doing it,” said the immigrant rights activist. “I think he is doing an incredible job, but it is not enough.”

The governor’s office says about 150,000 undocumented adult Californians will receive a one-time cash benefit of $500 per adult with a cap of $1,000 per household, from a fund consisting of $75 million from the state and an additional $50 million from Grantmakers Concerned with Immigrants and Refugees

“By helping the undocumented community, you’re really helping yourself,” Morones added. “Because the number one industry in the fifth most powerful economy in the world, which is California, is agriculture and 85 percent of the agricultural workers are undocumented.”

Since these farmworkers provide the food on people’s tables, they are front-line workers, he said.

“So the undocumented community in general gives much more to the economy than it takes,” Morones said. “When you have these far right people promoting hate saying, ‘They took all of this money,’ well they gave us a lot more.”