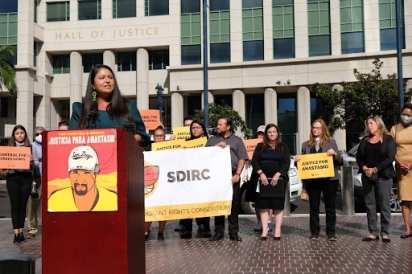 The SBCC letter to Congress calling for Congressional hearings reveals that the secret teams started in San Diego in 1987 and go by several names, all with the stated purpose of serving not as independent investigators, but rather “to exonerate agents. They act as cover-up units, protecting agents, rather than the public, and they answer to no one except the Border Patrol chiefs that control them,” the letter states. “The BPCITs are not authorized by Congress to engage in federal investigations in agent-involved killings and other use-of-force incidents. That authority is given to the FBI, the DHS Office of Inspector General (OIG), and in limited circumstances to the CBP Office of Professional Responsibility (OPR). They are also not formally deputized by any of these agencies to investigate. They are simply unlawful.”

The letter pointedly accuses the shadow forces of allowing abuses to go unchecked and agents to “get away with murder, as they did in the case of Anastasio Hernández Rojas and so many others. As the letter demonstrates, BPCITs withhold, corrupt, and destroy evidence against an agent. They are at the root of Border Patrol impunity. There can be no meaningful accountability of border agents as long as BPCITs exist. “

In a second media statement  on Nov. 4, the coalition calls on San Diego County District Attorney Summer Stephan to investigate and prosecute Border Patrol agents, supervisors and chiefs involved in obstruction of justice during the homicide investigation into the death of Anastasio Hernandez Rojas. Details of the alleged cover-up are outlined in a letter sent to the D.A. by Alliance San Diego, a coalition of immigrant rights groups.

Evidence provided by the groups indicate the secretive Border Patrol force impeded a San Diego Police homicide investigation into Rojas’ death and could be subject to state charges.

Rojas, a long-time San Diego resident and father of five children who are U.S. citizens, was beaten and tasered by Border Patrol agents on May 28, 2010 after asking for medical attention for his injured ankle. The letter to Congress cites evidence indicated that agents “hogtied him, dragged him, beat him with batons, punches and kicks, stood and kneeled on his body against the ground, and tasered him repeatedly for extended lapses of time, even after he had become unresponsive,” which his family in a civil lawsuit contends caused his death. The SPCIT reportedly withheld surveillance video requested by San Diego Police, then turned over tape of the wrong time period, and later claimed the video requested had been destroyed.

The Border Patrol contended that Rojas acted aggressively and kicked agents, but an eyewitness video showed otherwise, indicating Rojas was handcuffed face down. According to evidence cited by the SBCC, the BPCIT altered evidence by tampering with the original incident report which indicated that Rojas was compliant.  Despite a hospital blood draw that did not detect any drugs, a different sample of unknown origin was provided to the medical examiner, with no chain of custody or any indication that the blood was taken to the hospital. The second blood draw showed meth, leading prosecutors to opt against charging agents with murder.

The actions of the shadow forces have even drawn sharp criticism from a former Border Patrol Deputy Assistant Commissioner for Internal Affairs, James Wong. He has called for the groups to be abolished, stating, “The purpose of an investigation is to collect the facts, regardless of whether they are exculpatory or not. Investigators should never set out to mitigate liability. That is inappropriate. Given that Border Patrol CITs have worked to mitigate instead of collect facts leading to the truth shows that they are a questionable management tool, not a legitimate investigative tool. As such they should be abolished.”

The fact that no border agent has ever been successfully prosecuted in the nearly 100-year history of the Border Patrol is not accidental. It is by design, and for more than three decades has resulted in impunity directly due to the interference of unauthorized Border Patrol cover-up units that have protected agents rather than the members of the public harmed by them. This must end and Congress can play a pivotal role. We call on Congress to investigate these cover-up units, assess the harm they have caused, and shut them down.

At a press conference earlier this week, Dulce Garcia, Chair of the San Diego Immigrant Rights Consortium, stated, “SDIRC stands here today with the family of Anastasio to shine a light on the circumstances surrounding his death and the cover up by Border Patrol agents and chiefs that followed. The Border Patrol Critical Incident Investigative Teams do not operate to seek justice - they operate to protect the agents, the chiefs and the agency. We are not safe when those that are supposedly doing the investigation are actually doing the cover up. Any other community member would have been prosecuted in this case yet Border Patrol agents have never been held accountable. Dignity, justice, and accountability are what we fight for and the abuses of power that took place must be exposed.”

The Border Patrol has not responded on record to inquiries from multiple media outlets about these shadow forces.  However the San Diego Union-Tribune reports, “When asked about the units, a spokesperson with Customs and Border Protection who declined to be named on the record said that the agency has a “multi-tiered oversight framework in place to address allegations of misconduct involving agency personnel.”

“The U.S. Border Patrol maintains teams with specialized evidence collection capabilities across the southwest border,” the unnamed spokesperson said. “These teams consist of highly trained personnel available to respond around the clock to collect and process evidence related to CBP enforcement activities as well as critical incidents. In the case of serious incidents involving CBP personnel, members of these teams are sometimes called upon to assist investigators from CBP OPR and other local, state, and federal law enforcement agencies. This is a vitally important capability as many critical incidents involving CBP operations occur in remote locations where other agencies may be unwilling or unable to respond.”