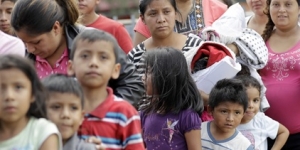 Suzanne Potter, California News Service
Photo: Immigrant children, creative commons image via S.A.
November 8, 2019 (Sacramento) - Immigrants' rights groups are working to calm fears in the migrant community - after a judge blocked President Donald Trump's changes to the public charge rules last month.
Those rules would have made it harder for people to get a green card or visa if they use programs such as Medi-Cal, Cal Fresh or housing vouchers. Staff Attorney Russell Jauregui with the nonprofit San Bernardino Community Service Center says some migrant parents are pulling their U.S. citizen children out of these programs for fear that it would hurt the parents' application for permanent residency later on.
"These benefits that are available for your U.S. citizen kids are not going to hurt you," says Jauregui. "Even the proposed rule was clear that benefits for U.S. citizen kids would not penalize applicants."
Even if the Trump administration eventually prevails and gets a judge to greenlight the new rules, they wouldn't go into effect until all appeals are exhausted, and even then immigration officials could only consider benefits used after the rule takes effect. It would not be retroactive.
Supporters of the proposed changes say new immigrants should have to prove they can support themselves financially and will not rely on public benefits.
Jauregui says the proposed changes have not been blocked for people who are applying for a green card from abroad, or who were sent back to their home country to finish the application process.
"Some people have to leave the United States to finish their process," says Jauregui. "Then a different set of rules apply. So those people should really talk to a lawyer before they pursue their application."
The proposed changes also do not apply to people who already are permanent residents applying for citizenship, or who are applying for asylum or refugee status.