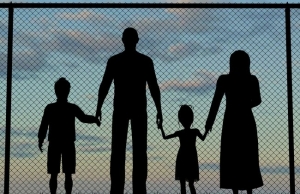 By Suzanne Potter, California News Service
Photo: Riko Best, Adobe Stock via California News Service
February 24, 2020 (Sacramento) - Starting today, immigrants applying for green cards will be subject to the Trump administration's new 'public charge' rule.
The changes make it harder for people who receive certain types of public assistance to be approved. Benefits used before February 24 will not count, and the changes do not include the use of WIC or Medi-Cal for children.
At Plascencia Consulting, immigration advocate and executive director Hector Plascensia says before this, the feds only considered use of programs like Supplemental Security Income, Cal Works and nursing-home care under Medi-Cal.
"What is being added - starting this coming Monday, February 24th - it's going to include Cal Fresh, housing Section 8 and public housing, and federally funded Medicaid," says Plascensia.
The changes don't affect many immigrants, including those who are U.S. citizens, legal residents, refugees or asylees, Deferred Action for Childhood Arrival or Temporary Protected Status recipients, or those with U-visas and T-visas - which are for victims of violent crime, trafficking and domestic violence.
The U.S. Supreme Court upheld the new rule, which the Trump administration argues is necessary to make sure that immigrants can support themselves financially.
Plascencia notes that use of certain benefits doesn't automatically make someone a public charge - rather, it triggers a step known as a "totality of circumstances" review.
"They look at your age, employment, education, health, income - to be able to determine your entire case," says Plascensia.
There's concern that the rule change will prompt people to drop out of needed social programs, or be afraid of contact with the 2020 Census, schools, hospitals and police officers.
Plascencia says people concerned about the public charge rule can get more details on the website 'keepyourbenefitsCA.org.'