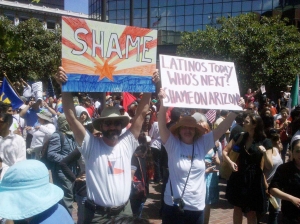 Set to take effect July 29, Arizona’s law requires police to check immigration status of anyone they suspect is in the country illegally and forces immigrants to carry documents at all time, or risk detention. Supporters contend the bill is needed to control illegal immigration. Opponents fear it will lead to racial profiling, break up families and result in harassment or detention even of lawful residents.

On July 28, a caravan of San Diego County residents is leaving for Arizona. A protest rally will be held at Chicano Park in San Diego prior to departure. The coalition, which includes Latino and human rights organization, is part of a national campaign called Standing on the Side of Love with Immigrant Families. The campaign seeks to boycott Arizona and call for comprehensive immigration reform. “We are all Arizona!” Said organizer Michelle Krug, who called on on “all people of conscience to converge on Arizona to Stop the Hate.” Opponents of Arizona’s law also called for a boycott of an Arizona Diamondbacks game in San Diego earlier this week.

“In actuality, Arizona is doing nothing more than enforcing the laws that the federal government refuses to enforce itself,” Hunter said in a press release. "The preference of the administration to challenge Arizona while ignoring sanctuary cities is blatantly hypocritical."

The Obama administration has ramped up some enforcement efforts against employers of illegal immigrants. Earlier this month, the New York Times reported that the federal government has begun quietly cracking down on thousands of companies suspected of hiring hire undocumented workers—not with highly publicized raids, but instead by auditing employment records.

According to the Times, more than 2,900 companies have been audited by the Obama administration so far—far surpassing the number of companies that the Bush administration raided. Immigration and Customs Enforcement imposed $3 million in fines on businesses found hiring in violation and forced them to fire illegal immigrant workers—not just those caught working during the audit, but all who were found on payrolls. The government stopped short, however, of deporting immigrant workers who lacked legal status but had otherwise clean records.

Seeking to undermine the federal lawsuit, on Thursday Congressman Duncan Hunter (R-El Cajon) introduced the Sanctuary City Protection Act of 2010. The bill would prohibit the federal government from participating in the suit against Arizona unless Attorney General Eric Holder submits a plan to Congress to enforce immigration laws in any city or state that has a policy to disobey the laws.

Sanctuary cities such as Los Angeles and San Francisco have ordinances inspired by religious groups that sheltered refugees and illegal immigrants fleeing persecution from Central America in the 1980s. But Holder spokesperson Tracy Schmaler has said, “There’s a big difference between a state or a locality saying they are not going to use their resources to enforce a federal law, as so-called sanctuary cities have done, and a state passing its own immigration policy that actively interferes with federal law,” the Washington Times reported.

In 2007, President George W. Bush’s Homeland Security Secretary Michael Chertoff told Co ngress he was not aware of any city “that actually interferes with our ability to enforce the law.”

Hunter aide Joe Kasper told the North County Times that the bill will face an uphill battle in Congress, adding that Hunter may attempt to insert the bill’s language as an amendment into an appropriations bill to force legislators to take a stand on a crackdown against sanctuary cities.

From this event I can only see a very sad reality of survival and pulling down other people to save oneself. The law is clearly inspired by the questionable Arizona immigration law passed a year ago, and I can't even imagine how could so many people in the country are considering such law that clearly deepen the division and discrimination among races. Why have our apathy gone so out of control? I've just read another article and I'm in disbelief: Controversy erupts over Alabama immigration law, newstype.com. I can't shake off the feeling that the 49% of the public that supported this law consists of self-centered "legals" desperately looking for someone to blame for their own hardships, and use this law as a stepping stone to gain themselves a bigger bite at the chance of having a good life.