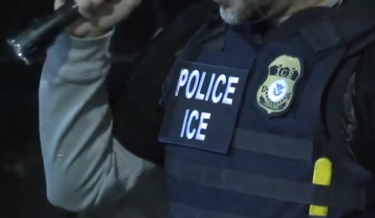 February 11, 2017 (San Diego) – Immigration raids in cities across the nation conducted since Friday are striking fear among immigrant communities.  Although the Trump administration has claimed the sweeps are routine, some of those picked up for deportation have no criminal backgrounds, belying President Donald Trump’s post-election promise to focus on criminals.

In Arizona, a mother with two children born in America was deported, prompting protests and tearful separation from her children and husband. Guadelupe Garcia de Rayos, 35, came to the U.S. at age 14 and has lived here for 21 years. She has no criminal history, other than being picked up in an immigration raid at her workplace in 2008.  She has checked in with Immigration and Customs Officials regularly as required since then, but was considered a low priority for deportation—until yesterday.

It is unclear whether the sweeps in multiple states including California were due to Trump’s Executive Order signed January 25th.  The order in fact authorizes deportations not only for convicted criminals, but far more broadly, also for anyone who is accused of a crime or has committed acts that constitute a chargeable offense—in short, merely accusing someone of a crime, even falsely, could lead to deportation.

The order also allow deportation for anyone who misrepresented information on government applications or interviews with officials, abused any program to receive public benefits, are subject to a final order for removal, or otherwise pose a risk to public safety or national security.

Those categories are broad enough to encompass deportation of millions of people.  In San Diego, 22% of the residents are undocumented immigrants, or about 170,000 people, according to a Pew Research study. The potential impacts could be huge on sectors including the economy, tourism businesses, agriculture, housing and schools. 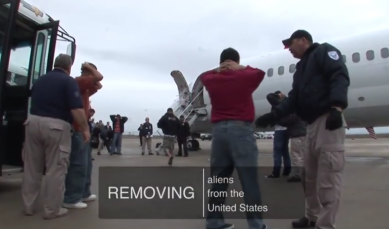 Senator Feinstein has issued a statement harshly criticizing the sweeps. “These reports show the serious consequences of the president’s executive order, which allows all undocumented immigrants to be characterized as criminals and requires increased enforcement in communities, rather than prioritizing dangerous criminals,” the California Democrat said.

“It would be hard for me to justify giving grant money to cooperate with removal operations and you were not able to help us with that,” he said.

But when asked by San Diego Police Chief Shelley Zimmerman for a definition of sanctuary cities, Kelly admitted that he didn’t know.  Zimmerman has previously voiced concerns that crime victims may not report crimes if they fear deportation by coming forward, a situation that could prevent arrest of violent criminals preying on not only immigrants but others in the community.

On Thursday, San Diego Congressman Duncan Hunter issued a press release announced that for Fiscal Year 2018, he will not submit any federal appropriations requests on behalf of states, cities, universities or other entities that have an ordinance, policy or practice in place that undermines the enforcement of federal immigration laws.

The state of California is considering a measure to declare California a sanctuary state, as have cities such as San Francisco and Los Angeles, though no San Diego County cities have officially done so.

Last Congress, Hunter’s legislation—H.R. 3009, the Enforce the Law for Sanctuary Cities Act—was passed by the House on July 23, 2015, by a vote of 241-179 but did not become law.  More recently, Hunter introduced the No Funding for Sanctuary Campuses Act, which denies Title IV funding to sanctuary campuses, which would likely include the University of California and California State University systems that have taken action to protect students who are undocumented.

On social media, some criticized the raids, while others voiced support.

One comment posted on a San Diego Union-Tribune story urged readers to report anyone offering to help an undocumented immigrant.  The poster, who identified herself as “Deplorable Gisell” wrote, “ATTENTION: its a crime to aid illegal aliens as per Title 8, U.S.C. 1324(a) - Report to @FBI if you see anyone on Twitter doing so #ICERaids.

The American Friends Committee has published a bilingual booklet on rights that immigrants should know. You can read it here. 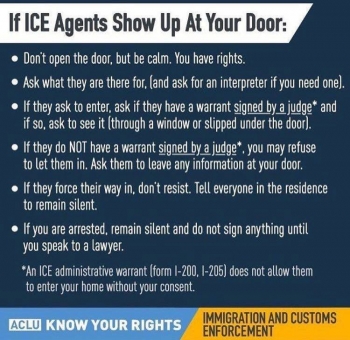 Is San Diego a sanctuary city and what does that even mean? (Voice of San Diego)

time to enforce the law regarding illegal aliens

...we enforced our laws.
A friend IN ICE said they will have 2 units In Santee and 4 Units in El Cajon next week. Should be interesting