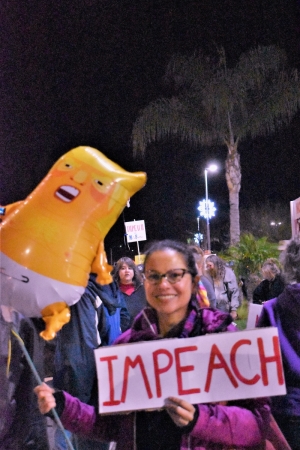 Trish, who wished to not disclose her full name, was one of many who showed up at an impeachment eve, impeach now protest held in El Cajon on Dec. 17.

She is a psychiatrist and says she is treating many for a variety of issues relating to Trump.

“I’ve been treating a rise in PTSD, anxiety and depression in the last three years,” she said. “There is no hope for some.” Trish, according to her patients, attributes it to the Trump presidency and campaign.

The El Cajon protest, held at the northwest street crossing of Johnson and Fletcher Parkway, was just one of many held across the country.

The line of protestors ran along the street corner, all the way to the north driveway entrances, northwest of Crunch, on the sidewalks of Westfield’s Parkway Plaza Shopping Center. 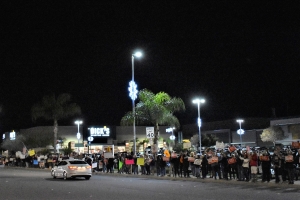 Alpine resident, Mike S., a host who declined to provide his last name, said “There was 400 reservations.  Usually you get about half. There are other protests in Escondido, Temecula, and Encinitas to Orange county---they have a banner to unfurl."

Yusuf Malik of El Cajon was passing by and stopped to join in.

“Impeach you Merry Christmas,” was a song sung to the tune of “We wish you a Merry Christmas.” Cars drove by, honking their horns in support, with other drivers flipped the finger and yelled “Trump.”

A water bottle was lobbed at some protestors towards the end of the protest, which ran from 5:30 p.m. to approximately 7:00 p.m.---but no one was hurt due to bad aim. 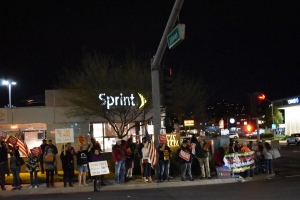 There were varying numbers of pro-Trump, counter protestors, on the meridian, that numbered from one to almost ten.  ECM tried to talk to a pro-Trump protester, but he did not comply. 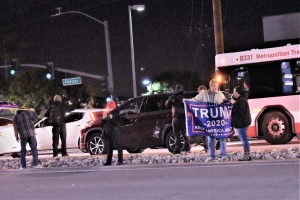 One protestor had a Trump baby mini balloon.

“I’m a registered Republican who is changing my party to independent tomorrow,” said Bianca Amann of San Diego, who was carrying the Trump-baby balloon on-a-stick.

Josh Morse, of Ocean Beach noticed that his dog only barked at Trump during the televised debates. Morse created a dog toy effigy of Trump and was selling them at the protest.

The vote on impeachment in the House of Representatives is scheduled for Dec. 18. The full House will vote on two articles of impeachment, for abuse of power and obstruction of Congress.

The President is accused of "conduct for corrupt purposes in pursuit of personal benefit” that “compromised the national security of the United States and undermined the integrity of the United States democratic process,” also injuring the interests of the nation. Specifically, article 1 accuses Trump of soliciting interference in the 2020 election by pressuring the Ukraine to announce investigations of his rival’s son, Hunter Biden.  Trump suspended $381 million in military aid approved by Congress in a bipartisan vote to help Ukraine oppose Russian aggression. The vital military funds were withheld, along with a promised visit  with the Ukrainian president at the White House.

The second article accuses the president of obstruction the Congressional impeachment inquiry, including ordering executive branch agencies and officials to illegally defy subpoenas and withhold all documents and records sought by Congressional investigators.

If the House approves impeachment, a trial will then be held in the Senate to determine whether or not to remove the President from office.