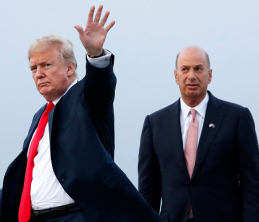 November 22, 2019 (Washington D.C.) – The second week of impeachment hearings before the House Intelligence Committee brought drama and surprises. Below are highlights of key witness testimony and summation statements from the Committee's top Democrat and Republican Senators.

Ambassador Sondland: “Was there a quid pro quo?...The answer is yes…Everyone was in the loop.”

Perhaps the most startling testimony came from Ambassador Gordon Sondland, a Republican who donated over a million dollars to Donald Trump’s presidential campaign before being appointed  Ambassador to the European Union.  He stated flatly, “Was there a quid pro quo?  As I testified previously, with regard to the requested White House call and the White House meeting, the answer is yes.” Sondland further states, "Everyone was in the loop. It was no secret. Everyone was informed via email on July 19th, days before the presidential call."

Unlike prior witnesses whom Republican committee members attacked for “hearsay” evidence, Sondland had direct knowledge of the key facts and could not be disparaged for any partisan motive.  His testimony directly contradicts the repeated claim by President Trump that there was “no quid pro quo” (a favor granted in exchange for something in return).  According to Sondland and several prior witnesses, Trump wanted Ukrainian president Volodymyr Zelensky to announce an investigation into Hunter Biden, the son of Joe Biden, a key Trump rival in the 2020 election.  Hunter Biden worked for a Ukrainian company and was paid $50,000 a month while Biden was Vice President, though Ukraine’s prosecutor has previously found no corruption involving Biden.

Trump withheld military aid promised to Ukraine to fight Russian military aggression, an action that put lives at stake in the Ukraine, an action that surprised and troubled senior diplomats. If done for personal or political gain, that would violate U.S. campaign finance laws and could potentially be construed as bribery, one of two “high crimes” specifically mentioned in the Constitution as impeachable offenses.

Equally startling, Sondland also said he told Vice President Pence of his concern that Ukraine military aide appeared conditioned on political investigations, just before Pence met with Zelensky. Pence’s chief of staff Marc Short later denied that the conversation occurred, in comments to the Washington Post not made under oath.

Lawmakers heard from three officials Tuesday who listened in on the call. Lt. Col. Alexander Vindman, the National Security Council’s top Ukraine expert, said he was shocked by how the call played out. Jennifer Williams, an aide in Vice President Mike Pence’s office, told the impeachment panel that she found the call “unusual and inappropriate.” Tim Morrison, then director of Europe and Eurasia on the National Security Council, was more measured, calling concern over Trump pushing for a political favor “hypothetical.”

Kurt Volker, former U.S. Special Envoy to Ukraine, acknowledged that Sondland did raise the issue of “ “investigations” during a meeting at the White House between U.S. and Ukrainian officials. Volker had previously denied that the issue had come up but indicated his memory was refreshed by notes taken by other present, the accuracy of which he did not dispute. Volker also said he was unaware before the July 25 call that Biden’s son worked at Burisma, and that if he had realized that talk of Burisma meant investigating Biden, he would have objected.

Laura Cooper, the top Pentagon expert on Russia and Ukraine, testified Wednesday that Ukrainian officials asked the Defense Department on July 25 about the status of the frozen military aid, the same day Trump and Zelensky spoke by phone. Both Trump and Zelensky have claimed nothing inappropriate occurred. However Cooper’s statement casts doubt on Republican claims that the Ukraine’s leader was unaware of the military freeze, since his key officials were aware. Some House Republicans questioning has suggested that even if Trump did push for a Biden investigation by withholding military aide, it would not amount to extortion if Zelensky was unaware of the freeze. Attempted extortion is, however, also a crime.

Fiona Hill, former director of Europe and Eurasia for the National Security Council who left the post last summer voluntarily, delivered a strong rebuttal of a discredited conspiracy theory about Ukrainian meddling in the 2016 election, the other issue that Trump asked Zelensky to pursue.

“This is a fictional narrative that has been perpetrated and propagated by the Russian security services themselves,” Hill testified in her opening statements on Thursday.

“While Ambassador Sondland’s phone was not on speakerphone, I could hear the president’s voice through the earpiece of the phone,” Holmes said. “The president’s voice was very loud and recognizable, and Ambassador Sondland held the phone away from his ear for a period of time, presumably because of the loud volume.” Holmes said Sondland later told him that Trump didn’t care about Ukraine, but only about the investigations he was seeking.

Trump later tweeted in an effort to discredit Holmes’ assertion.  ““I have been watching people making phone calls my entire life. My hearing is, and has been, great,” Trump stated. “Never have I been watching a person making a call, which was not on speakerphone, and been able to hear or understand a conversation. I’ve even tried, but to no avail. Try it live!”

The White House has prohibited some key insiders who might have provided eyewitness accounts from testifying, though National Security Advisor John Bolton has asked a court to determine whether he must follow that presidential order or not.

Rep. Devin Nunes (R-California) accused Democrats of waging a campaign of accusing Trump of being a “Russian agent”,  leaking the Steele dossier, engaging in “dirty tricks” and plotting impeachment on various grounds from early in Trump’s term, before the Zelensky call.

Nunes denounced a “tyranny of the majority” referring to House Democrats.

He also faulted the Trump administration and GOP committee membres for trying to “smear” reputations of Lt.. Col. Vindman, a Purple Heart veteran and of nonpartisan career diplomats. “They don’t question the facts,” he indicated, noting that Ukraine is at war with Russia, while Trump reportedly cared only about investigating the Bidens.

“What do we care about?” Schiff asked. He likened the situation to Watergate, but characterized Trump’s “withholding aid from an ally at war” as “worse than anything that Nixon did.”  By seeking foreign intervention in a U.S. election a second time, Schiff said Trump considers himself above the law.

He concluded, “What is our duty here?  That’s what we need to be asking.”

Its fascinating how differently two groups can view a spectacle like this. Amazing to realize that our country is split, with both halves seeing these past two weeks as a win. Sad that ECM only chooses to represent the viewpoint of their half.

We quoted only one Dem in this story, Adam Schiff.   We included what the witnesses actually said, and these witnesses are mostly  neutral career diplomats except one is a major Trump donor.  So explain how that is biased?

Now there are some who say that no matter what laws Trump may have broken, it doesn't matter.  How is that not a betrayal of the public trust and our Constitution, regardless of what anyone else may have done?

https://www.vanityfair.com/news/2019/11/new-poll-suggests-democrats-impeachment-push-could-alienate-key-voters
in order to promote your narrative, its that simple. You conveniently neglected to include any of the quotes where Sondland admits this statement was based on his "assumption" and nothing else. You neglected to include the statement he made where he said the President said he wanted no quid pro quo, you can hear it here for yourself in case you missed it. Turner questions Sondland's 'somewhat circular' testimony This is just one example of many within this story where we could go back and forth all day. The fact is, there are multiple sides to every story, yet you've consistently chosen to promote one side. Vindman and Schiff have both testified under oath that they don't know who the whistleblower is, and they've both perjured themselves in making that statment. No mention of that here either. There is no such thing as nonpartisan reporting in this country anymore, and the sooner we all stop pretending there is, the sooner we can find a solution to that problem. You're political reporting is every bit as biased as Fox News, or CNN. The difference, is they own it.

I did not "cherry pick."  I did not watch all of the many hours of every witness's testimony but did watch highlights on CSpan and other networks. If Sondland said Trump told hm there wasn't a quid pro quo, I didn't hear that part. Of course this president is known to have lied more than any prior president, documented by numerous fact check sites.  So we can't just take his word for it, if he did deny a quid pro quo. Ambassador Sondland says flatly that there WAS a quid pro quo, regardless of what Trump said.

Where did you see that Vindman and Schiff know who the whistleblower is?  What proof is there that they do, or did when under oath?

Considering the sources you choose to view such as the NYT, CNN, MSNBC et al and the self-admission that you didn't watch all of the testimony, it's no wonder you chose only to highlight testimony that portrays the the President in a bad light. You've chosen to ignore the fact that there was also much testimony that went in his favor too, because you refuse to accept it. As I stated previously, you're only representing one side of the argument while claiming to represent "all". If Vindman and Schiff don't know who the whistleblower is, then why do they need to protect the names of the individual(s) that Vindman spoke to? In this exchange, Nunes Questions Vindman Schiff just shut down Ranking Member Devin Nunes to advise Vindman on how to answer a question about the whistleblower. But Schiff likes to claim he doesn't know who the whistleblower is... So then how would he know Nunes is asking about the whistleblower? The answer is simple, they both know the identity, and Vindman is the one who leaked the information to the whistleblower.