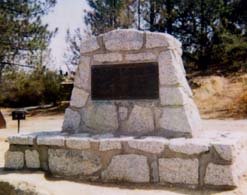 September 24, 2013 (Santa Ysabel) – Inaja. I always stop at the site when I drive through Santa Ysabel. I'll buy some bread and a sandwich at Dudley's and take in the view and watch the cars and motorcycles speeding by on Highway 79. The Inaja Memorial Picnic Site is a  picnic/day use area operated by the USFS  to honor eleven men who died while fighting a fire on  November 25, 1956.

"The eleven victims were cut off while still below the small bluff, presumably by an instantaneous “flash-over” of a large area of fire. This sudden expansion of the fire front was testified to by the survivors and other nearby observers. In addition, two fire bosses on the opposite side of the main San Diego Canyon observed the action of the fire when it made its fatal run. They reported that it ran up the ravine beside the ridge where the men were working and across the fire trail near the top. At about the time the fire got to the rim there was a sudden “flash-over” to the left, which the observers said simultaneously ignited a large area, perhaps 40 acres. This explosive “flash-over” enveloped the 11 victims just below the small bluff. It apparently was caused by ignition of gases forced up the ravine by the extremely rapid run of the fire.

All victims were found in an area with a radius of 45 feet and the lowermost one was only 300 feet from the tractor-built line at the top of the canyon rim. The fire barely crossed this line in only a few places, where it was quickly put out. Of the men that escaped, two had been working at the very lowest part of the trail. Two who had been working closest to the rim did not escape.

Several of the fire fighters, including the forest officers who lost their lives, stayed with the crew until the last, helping and urging others out even though they might otherwise have had an opportunity to escape. One of those who escaped credited a fellow crew man with saving his life when he became exhausted while climbing over the rock bluff."

Editor’s note:  The Inaja Fire was reportedly started by a 16-year-old who admitted he had a “crazy” idea to toss a match into dry brush and see if it would burn.  Tragically, it did – claiming 11 lives and charring over 43,000 acres in San Diego’s backcountry.