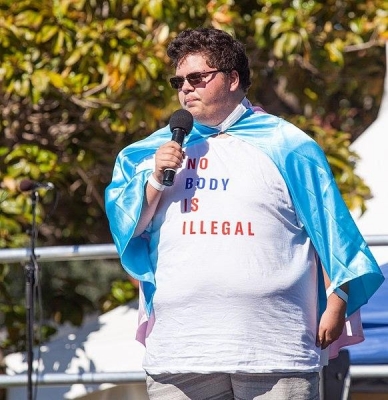 "Our work is not yet done," said one ACLU attorney, who noted that the organization is "continuing to fight against anti-trans laws targeting trans youth in states around the country."

June 28, 2021 (Washington D.C.) -- In what civil rights advocates hailed as "an incredible victory," the United States Supreme Court on Monday declined to hear the case of Gavin Grimm, a former Virginia high school student who in 2015 sued his county board of education over its policy of denying transgender pupils use of restrooms corresponding with their gender identity.

"Trans youth deserve to use the bathroom in peace without being humiliated and stigmatized by their own school boards and elected officials." —Gavin Grimm, plaintiff

The high court's move lets stand G.G. v. Gloucester County School Board, a 2020 ruling in which the U.S. Fourth Circuit Court of Appeals found that policies segregating transgender students from their peers are unconstitutional.

Specifically, Grimm—who was represented by the ACLU and ACLU of Virginia—successfully argued that the school board's discriminatory policy violated Title IX, the federal law barring discrimination on the basis of sex in education.

Grimm's legal battle began when, as a 15-year-old Gloucester High School sophomore in 2015, he sued the county school board. Earlier that year, the Obama administration's Department of Education issued guidance stating that "a school generally must treat transgender students consistent with their gender identity."

The U.S. District Court for the Eastern District of Virginia dismissed Grimm's case. He appealed, and in April 2016 the Fourth Circuit ruled in his favor.

However, the Supreme Court subsequently blocked an order allowing Grimm to use restrooms matching his gender identity, with the justices announcing in October 2016 that they would review the Fourth Circuit ruling.

"I am glad that my yearslong fight to have my school see me for who I am is over," he said in a statement. "Being forced to use the nurse's room, a private bathroom, and the girl's room was humiliating for me, and having to go to out-of-the-way bathrooms severely interfered with my education."

"Trans youth deserve to use the bathroom in peace without being humiliated and stigmatized by their own school boards and elected officials," Grimm asserted.

Josh Block, senior staff attorney with the ACLU's LGBTQ & HIV Project, said in a statement that "this is the third time in recent years that the Supreme Court has allowed appeals court decisions in support of transgender students to stand."

"This is an incredible victory for Gavin and for transgender students around the country," Block added. "Our work is not yet done, and the ACLU is continuing to fight against anti-trans laws targeting trans youth in states around the country."

According to the LGBTQ+ advocacy group GLAAD, there are scores of Republican-sponsored bills under consideration in a majority of U.S. states targeting the rights of transgender students. Numerous states have already passed laws or implemented executive orders erasing or limiting transgender students' rights to participate in scholastic sports or receive gender-affirming healthcare.

Editor’s note:  Two justices, conservatives Samuel Alito and Clarence Thomas, indicated that they would have heard the case.