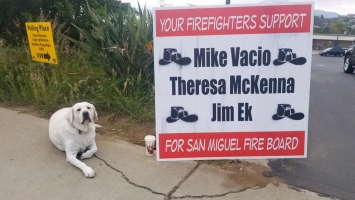 With 39% of districts counted, Theresa McKenna has 33.2%, Jim Ek 27.4%, and Michael Vaio 26.6%, defeating William A. Kiel II, son of board member William Kiel. The younger Kiel, a  trading card company owner with no fire experience, drew just 12.8% of the vote.

The stakes were high in the race, since the three incumbents who won reelection voted to return the district to independent operation, cancelling a contract with Cal Fire. The action passed by a slim one-vote margin, with Kiel, senior, voting against separating from Cal Fire.

A recent report shows the district has returned to profitability since returning to independent district status a year ago.