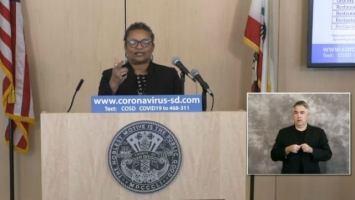 July 6, 2020 (San Diego) – Starting at midnight, all indoor service must stop in restaurants and wineries. Outdoor dining and activities can continue, as well as curbside pickup services.

Indoor family entertainment venues such as movie theaters and bowling alleys also must shut down, though outdoor facilities such as zoos can remain open.  The order is in effect for the next three weeks.

County health officials ordered the closures today in response to being placed on the state’s watchlist due to exceeding three COVID-19 pandemic trigger levels for positive cases in the past two weeks, the number of active community outbreaks, and a backlog in tracing new cases.

“Over the weekend, our numbers continued to grow in the wrong direction,” said Supervisor Greg Cox. “The intent here is to slow the spread,” he said at a media briefing, calling it “a temporary setback.”

“We are officially in the period of corrective action as outlined by the state of California,” said Supervisor Nathan Fletcher. “We’re certainly not the only place. The majority of California is in this situation.”

Ammar Campa-Najjar, 50th Congressional district candidate, voiced frustration and called for more relief for impacted businesses. “Starts and stops, uncertainty, and unpredictability is literally destroying mom & pop businesses in #CA50. The cost of opening a closed restaurant then closing it again, and watching fresh produce and meat go to waste, is painful for owners and employees.” he posted on Twitter.

He added, “If the government is going to force businesses to shutdown again, we better make sure PPP relief funding goes to those who need it most FAST. No more of this multimillion dollar corporations skipping to the front of the line because they’re well-off and well-connected.”

His opponent, Darrell Issa, has not yet commented on the latest shutdowns.

Last week, the state ordered 19 other counties to close down businesses such as bars, dine-in restaurant service and more.

California is far from alone in closing restaurants and bars, where high numbers of outbreaks have occurred nationally and locally.

According to Yelp, nearly 24,000 restaurants natiownide are closed due to the coronavirus pandemic. But the California Retaurant Association posted on its social media accounts, "We think the number is higher than that."  One bright spot for restaurants, however, is this: Yelp found that interest in takeout and delivery for restaurants is up 148%.

The new closures locally come after cases continued to surge over the holiday weekend.

However, there is some cause for hope. Today’s test results reported a 3.6% positive rate, substantially lower than the roughly 7% rate in recent days.  No new deaths were reported today.

However the numbers will likely rise over the next couple of weeks following Fourth of July activities and crowded local beaches that drew visitors form neighboring counties where beaches were shut down.

Since March, when the first case was identified here, San Diego County has had 17,000 cases and 387 deaths. The public is urged to wear masks around others in public, maintain six feet or more of social distancing, avoid going out if ill, and wash hands frequently.  The more people follow these guidelines, the more likely it will be that our region will be able to get outbreaks under control and allow many businesses to reopen.

*Phew* It sure is a good thing that Governor Newsoms Winery is still open for all to enjoy.