September 8, 2019 (Potrero) – A former chicken ranch that sparked a firestorm of controversy when Blackwater sought to acquire it to build a paramilitary training camp has been sold to Green Hygienics Holdings Inc., an industrial hemp cultivation company. The 824-acre Potrero Ranch land and buildings will be utilized to grow industrial hemp for cannabidiol (CBD) cultivation. 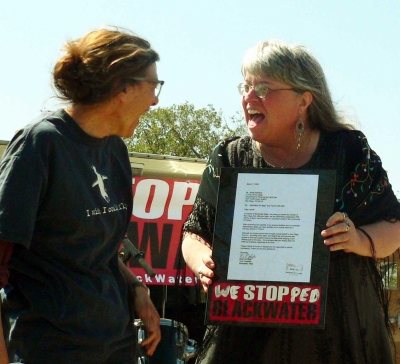 Jan Hedlun, the Potrero Planning Group member who led a community effort to halt Blackwater (now known as Academi) from disrupting the town’s rural tranquility with paramilitary and firearms training, informed ECM of the sale in an email titled, “New neighbors.”

Blackwater’s plans drew protests that included a march through the adjacent Hauser Wilderness led by environmental organizations who wanted to keep the site green.  Local peace groups, Activist San Diego, and Citizens Oversight also joined the fight, concerned over Blackwater's controversial actions in Iraq, including alleged opening fire on civilians and instigating the battle of Fallujah.

Potrero residents' efforts to stop Blackwater from entering their community drew international media attention with reporters from CNN, the New York Times and the BBC all visiting Potrero to cover the story of a small town standing up to a Goliath company known as the “world’s largest private mercenary army” according to journalist/author Jeremy Scahill, who wrote a book about Blackwater.

In October 2007, the Harris Fire scorched the valley, belying a Blackwater vice president’s over-confident boast that the valley would never burn. (In fact it already had, the night before.)  Blackwater offered wildfire relief and set up a large military tent with cots for fire survivors, but the proud people of Potrero refused to accept Blackwater's charity. Instead, they headed to the polls and voted to recall all five planners who voted for Blackwater, keeping only Hedlun.

Months later, in spring 2008, Blackwater abruptly announced cancellation of its plans, citing high costs of noise abatement, though many believed that massive protests, negative publicity and the hellacious wildfire fueled by hurricane-force winds may have dissuaded Blackwater from putting a bunkhouse with 200 men and a city-block sized flammable ammunition storage facility on the site.

Residents gleefully celebrated news that the agricultural property would not be converted into a paramilitary training grounds—though itslong-term future remained uncertain. Some feared it might be converted to a massive energy project or housing development, though it was zoned agricultural.

Some residents might think it's high time to see the site purchased by an owner committed to keeping the site agricultural and "green" in more ways than one. 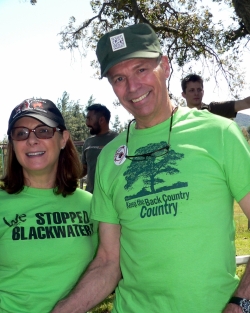 Martin Eder, founder of Activist San Diego ([photo, left, with the late Susan Friedman), had this reaction. "Hearing that the 800 acre Potrero Ranch has been purchased for the cultivation of hemp and CBD, a marijuana extract , seems to be poetic justice.  I was part of the struggle to keep Blackwater Inc. from purchasing that same property.  In many senses the two corporations seem to be polar opposites.  Blackwater* was the world's largest private mercenary army embroiled in running security in the dirty war in Iraq and accused of ruthlessly killing inocent civilians. The cannabis industry is associated with peace, love and good vibes, " Come on people, smile on your brother, let us love one another"...

Peace activists Carol Jahnkow and Friedman  got Eder and Activist San Diego deeply involved in the struggle agains Blackwater, he recalls. "Blackwater tried to buy their way into Potrero to set up a `training camp' at the Ranch promising jobs and community benefits. Susan  had read and internalized Jeremy Scahill's book on Blackwater and its owner Eric Prince,  described as a Christian Jihadist,  monetizing the dark world of clandestine paramilitary operations. The notion that this corporation would set up its Western headquarters in San Diego County launched an epic battle between the peace movement and the billion-dollar corporate giant. Low and behold the peaceniks won  the hearts and minds of people in Potrero, who slowly came to realize that Blackwater might turn out to be some very nasty neighbors!"

Miriam Raftery was the lead reporter covering the Potrero-Blackwater battle for multiple local and national publications back then before founding ECM in 2008 in part due to censorship by other local media outlets, where Blackwater had purchased advertising, and in part to bring better coverage during wildfires such has the Harris Fire that caught many Potrero residents unaware.  Eder went on to found KNSJ Radio, the station on which ECM's radio show now airs.

But Eder sounds a  cautionary note on the new owners of Potrero Ranch. "Despite the collective sigh of relief that hemp & peace replaced Blackwater mercenaries, it behooves all of us, most particularly Potrero residents,  to monitor any corporate interests," he states. "This is not a mom and pop back yard victory garden  being proposed.  This could be a massive project that would affect the water table and the peaceful quality of life in the backcountry.  Buyer beware, little Potrero will not tolerate any nasty neighbors."

Indeed, well water usage is a concern raised by some in Potrero, a rural town where wells and groundwater are vital to sustain residents, livestock and agriculture.

Raymond Lutz, founder of Citizens Oversight, was also a vocal opponent of Blackwater's Potrero project. "The win over Blackwater was our first big project that proved that our method of providing oversight and working with the community can have big rewards," he recalled. Asked his thoughts on the hemp farm project, he told ECM, "Anything is better than Blackwater, and this looks at first glance like a great business for the valley that will provide many jobs for locals. But it is intensive monoculture farming. Are they planning on using chemical fertilizers and pesticides? It's a good idea to convert the old chicken coop buildings into green houses. There should be plenty of natural fertilizer to get the them started. We'll need to keep a sharp eye out but this appears to be a great new business that is not inappropriate for the area."

The company has indicated it plans to seek USDA certification, which would prohibit use of chemical fertilizers, pesticides or herbicides, if the full site is included in that certification. 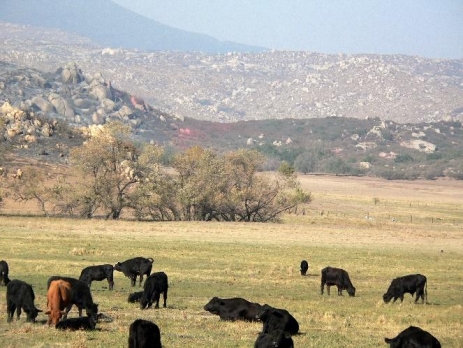 The site had been used in the past to graze cattle and raise poultry. It was also a haven for wildlife; golden eagles and mountain lions have been known to frequent the site.

New California regulations and registration of industrial hemp became legal in April 2019 and industrial hemp cultivation is now legal in San Diego County, provided commercial growers register with the County of San Diego Dept. of Agriculture, Weights and Measures prior to cultivation, in accordance with state law.

Green Hygienics confirmed the sale in a press release which calls the valley ideal for industrial hemp for CBD cultivation and an application for USDA Organic certification. The release cites the area’s abundant water supply, soil type, soil PH, altitude, and flat, arable land that is sheltered by surrounding mountains.  In addition to cultivation in the soil, the company has already begun converting over 400,000 square feet of outbuildings into greenhouses which will allow multiple harvests on the property each year.

Ron Loudon, Chief Executive Officer, stated, “We have been working at the property under a lease agreement for the last two months purchasing equipment and preparing to begin cultivation immediately. The combination of the greenhouse space and acreage will create the capacity to produce significant revenues for Green Hygienics.”

While Green Hygienics plans to sell its industrial hemp for use in CBD products, hemp has a long history of use in a wide range of other products.

According to the Columbia History of the World, the oldest relic of human industry is a scrap of hemp fabric dating back to around 8,000 B.C.  Presidents Washington and Jefferson grew hemp – and during the Colonial Era and early years of our nation, Americans were legally bound to grow hemp which was used in items as diverse as ropes on American ships to paper.

In 1937, a tax act restricting marijuana also made hemp cultivation difficult for U.S. farmers. The tide shift back toward growers during World War II, when the U.S. Department of Agriculture even produced a film called “Hemp For Victory to encourage farmers to grow hemp and the government subsidized hemp crops.  But the industry faded away after the war and in 1970, the Controlled Substances Act lumped hemp in with marijuana, banning its use and cultivation until the 2018 legislation once again restored the rights of farmers to grow industrial hemp.