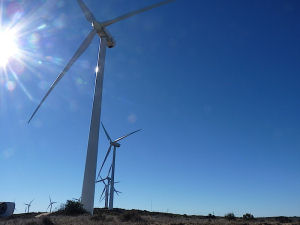 February 8, 2013 (San Diego's East County)--As problems with the large wind and solar projects in East County continue to surface, I suspect there will be a tendency to say Big = Bad. I’ve been doing that myself the last few weeks. I think we need to isolate the problems and deal with them one at a time.

The wind farm at Ocotillo appears to lack the necessary wind, but am also aware that one of the problems with wind farms in East Germany has been too much wind. The Czech and Polish governments are said to have flipped the switches, to cut off the flow of surplus energy into their countries.  The alleged lack of wind at Ocotillo could be an insurmountable problem, which raises serious questions about how the facility came to be built in the first place. The alleged surplus in East Germany will cease to be a problem once we develop a method of storing the excess energy for months rather than minutes. 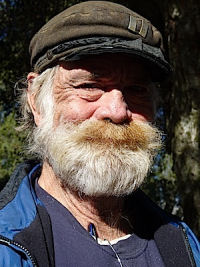 These same problems have been surfacing in connection with the large solar projects going into Eastern County. The plight of retired tugboat captain Don Renard belongs in comedy, not than real life. Three solar farms – a total of 1,500 solar panels – are scheduled to go up around his house. He is actually surrounded. Some of their 30′ high panels are to be 300 feet from his doorstep.  so he asks, ““Why aim 1,500 panels at our house?”  A lot of East County residents don’t want industrial scale solar development in their back yards. Their voices are being ignored. They have no rights. Nor do the Native Americans who have tried to stop the exploitation of land they hold sacred.

So what do we do about it? The problem is not with renewable energy, in fact many of the people who oppose these large projects are in favour of both solar and wind energy when utilized on a smaller, more sensitive manner. Personally, I am not ready to write off big solar and big wind projects – yet – but I think every project needs to be carefully evaluated by ALL concerned parties and simple questions answered:

We should not be hearing the kinds of stories that are coming out of East County. We also need to change a system where applying for a tax credit appears to take priority over human lives.  These issues need to be addressed before such projects are even begun.

"  Nor do the Native Americans who have tried to stop the exploitation of land they hold sacred  ."  Are you serious? Someone has not been paying attention. First the Campo Band tried for over a decade to put a toxic waste dump on "their" land. Now that has failed and they are planning to cover virtually the ENTIRE RESERVATION with windmills. The next "native" american who tells me they are the protectors of mother earth is not going to like how I respond.

The majority of tribes have long been good stewards of the land. Campo is a notable exception. Viejas, Syucuan, Quechan and other tribes have all worked hard to fight the destruction of sacred lands in our region.  I know many people in other tribes who are very disappointed over what Campo is doing with those turbines, but they respect the sovereignty of another tribe.