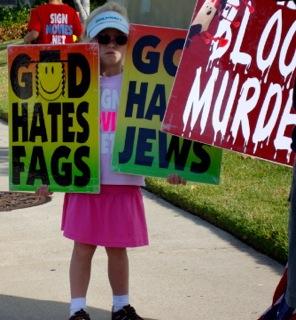 Westboro has protested funerals of soldiers and slain Sandy Hook elementary students.  Its inflammatory hate speech targets gays and lesbians, Jews, Muslims, Catholics and others.
By Miriam Raftery
March 13, 2019 (San Diego’s East County) – Westboro Baptist Church has been designated a hate group by the Anti-Defamation League and by the Southern Poverty Law Center.  The notorious cult-like group has announced on its website plans on March 25 to picket El Cajon Valley High School in El Cajon at 7 a.m. and Monte Vista High School in Spring Valley at 8:50 a.m.
The Kansas-based, family-run cult has gained notoriety for its “picketing ministry” at which members hold signs bearing messages such as “God Hates Fags,” Thank God for Dead Soldiers,” “Jews Killed Jesus,” and “Thank God for 9/11.” The group has been banned from entering some foreign countries, including Canada and the United Kingdom.
They first drew nationwide scrutiny when they protested the funeral of Matthew Shepherd, victim of a brutal hate crime in Wyoming, as well as at funerals for victims of a mass shooting at a gay nightclub in Orlando, Florida and funerals of children murdered at Sandy Hook Elementary School. They have also shown racism, suggesting President Barack Obama was the “Antichrist” and targeting the funeral of anti-apartheid leader Nelson Mandela. Despite the death of the cult’s founder, Fred Phelps, in 2014, his children and others have carried on the picketing crusades.
The group has been denounced by the world’s largest Baptist organizations as well as by many mainstream Christian churches, conservative Fox News commentator Bill O’Reilly and liberal activist Michael Moore, among others. Westboro’s targets are broad; one of their new posters reads “Most people go to hell.”
Westboro’s website does not state why specifically the group is targeting two high schools in San Diego’s East County.  A tipster advised ECM that Westboro plans to protest “minority students” at the two ethnically diverse schools, however Westboro did not respond to our email requesting comment.
Grossmont Union High School District director of public affairs and legislative relations Catherine Martin told ECM, "We’re not participating in any way. This action was brought to our attention by law enforcement. We’re having conversations with the El Cajon Police Department and the Sheriff’s Department (RSD Station) to ensure safe passage of our students to school that morning. They have plans in place to ensure order and safety.I refer any additional questions at this time to law enforcement."
The ECPD has not yet responded to our inquiry seeking more information.
Local civil rights leaders voiced outrage upon hearing of Westboro’s plans.
“This is appalling. We have no room for hate in El Cajon,” Latino rights leader Estela de los Rios at CSA told ECM. De los Rios says she has been actively involved in efforts to reduce bullying at El Cajon Valley High School, adding that “children of color are treated differently regarding bullying,” with children of Mexican and Middle Eastern heritage most negatively impacted.
Rev. Shane Harris, national president of the People’s Alliance for Justice, offered a national perspective on Westboro’s picketing in cities and towns across the U.S. “We stand against any kind of message of hate, no matter who it is against.” He added, “Their message is not God’s message of unity…We come against it with love and unity and compassion.” Those preaching hate with Westboro will ultimately face God’s judgment for their actions, he observed.
Tonja Daniels San Diego Chapter President of the People’s Alliance for Justice, likens Westboro’s tactics to “brainwashing” and bullying of students arriving at school locally.  “From a local perspective, I would not welcome anybody that tries to cause division.”
Lawsuits and legislation have sought to shut down their protests at funerals, but the Supreme Court upheld free speech rights for Westboro as constitutional.
Across the nation, counter-protests have often been held wherever Westboro pickets occur.  The Patriot Guard Riders, a motorcyclist group, formed to protect those attending funerals of veterans from Westboro’s wrath.  Some counter-protesters have held up shields to prevent protest targets from having to view Westboro’s hate-laced messages.  Kazoos, chants and songs have been utilized by some activists to drown out angry chants by Westboro picketers.
On Facebook, some local residents debated how to respond to Westboro’s planned pickets of local schools.
“They want attention…I say ‘ignore them,’” writes Joe Vee.
But Jill Barto, a Cajon Valley Union School District trustee, posts, “I’m going to support the students.  I hope community members come out to join in supporting the students and not the protesters.” She added that she alerted the El Cajon Police upon learning of Westboro’s plans, also notifying the Cajon Valley District, an elementary school district whose students feed into the Grossmont-Union High School District, because “we have kids walking to school around that time.”
Kat Wolfdancer calls for a peaceful rally. “Put a line of bodies between this hate club and our kids, and turn our backs on the haters.”
Lisa Wood agrees, then suggested, “Maybe even the football teams from the high schools” could take a stand for the students.
Margaret Mompelier believes Westboro is “not a church in any sense of the word,” concluding, “their tax exempt status needs to be taken away because they are involved in politics.”

Dam do you all hear yourselves, get the patriot guards lol, get somebody,to protect these kids, and the community. Hey got idea get off your butts do it yourselves, all you have to do is form a tight circle around these ppl, and if one bumps you, then.. hate speech isn't protected by the 1st as in direct, personal insults that are so offensive they’re likely to provoke their specific target to respond immediately with violence. The Court has also said that laws can’t prohibit only some types of fighting words, like those based on racial bias. Westboro Baptist does that to the tee, everything that comes out their mouth to you, if your immediate thought isn't violence, then dunno lol but dam don't expect other's to do what you should be doing..
Sure hate to see these despicable, immoral people coming to East County. Please donate to the Patriot Guard Riders who protect the families of fallen soldiers from the hate this group spreads.
Looking at a funnier side of it may help. Here's a little song for them :-) https://www.youtube.com/watch?v=GNpoO9yISDw
Based on facts it would seem. The first amendment is okay with me, yet it serves no purpose to promote hate.
Wow! Judgment precludes a rally. I like to reserve it until I see and hear from those that express that first Amendment right.
Who could have predicted haters like these would come to El Cajon and create such an outrageous event! This is potentially going to get very ugly! This is Not the type of thing we want El Cajon to be known for, we have enough issues here as it is and certainly don't need more. Reverend Harris will no doubt be there out in front as a protective shield, as will many others. Hopefully the Patriot Guard Riders, or a similar motorcycle club will show up to protect these kids, and the community.

Sorry, ECV and MV readers, ECM Sports won't be covering any athletics at these two schools on the 25th.