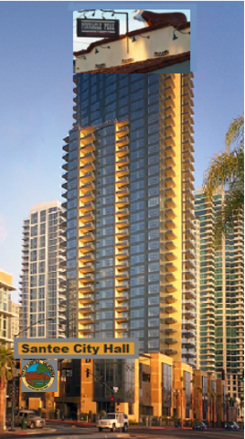 Santee has long grappled with a NIMBY (not in my backyard) attitude opposing such projects in the city’s neighborhoods. When the state of California passed a law requiring every city to build affordable housing, Santee’s City Council responded with proposals to tear down the city’s drive in movie-theatre or raze a historical barn, the city’s oldest structure.

Now, the “Put it All on City Hall” coalition seeks voters’ approval to erect a 25-story tower at the civic center site, putting hundreds of affordable and low-income housing units, as well as a homeless shelter and services, all  atop a revamped City Council chamber.

A rooftop community garden will be tended to by residents, while the complex’s Minto Mega-Jogging Track and Fitness Center will help keep residents and councilmembers in shape.

Pinnacle Peak Steakhouse will return to Santee atop the top floor of the Council Tower, crowned by its landmark steer statue. The steakhouse will feature views from Santee to the sea—and the mountains, too, all amid the wafting aromas of sizzling porterhouses. 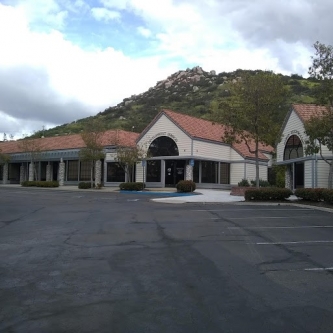 A second tower will be built on the site of current city offices in the same complex (Before photo, right). It will house a new state of the art public library with expanded space, computer stations and a community meeting room, as well as offices for city staff. The Library Tower will also have a level of luxury penthouse suites on top.

Both buildings will feature a blend of gleaming contemporary features topped by Spanish tile roofs, consistent with the red roofing on the present one-story structures.

Parking for the twin-tower complex will be underground, where a subterranean transit station will provide access to a new trolley line extension.

Rental fees from apartments, penthouse suites and restaurants will partially fund the ambitious project, which will also use funds from a temporary one-cent sales tax to be assessed over a decade, if voters approve the “Put It All On City Hall” initiative.

“It’s high time for Santee to do its fair share to care for its homeless population as well as provide affordable housing for young families, students and seniors,” says Ima Dogooder, spokesperson for the coalition.

Flanked by environmental leaders and advocates for the homeless at a press conference outside city hall, she unveiled renderings, adding, “Our plan avoids sprawl, meets the state’s denser dwelling requirements and preserves our historic places. We believe voters will gladly pay a temporary one cent sales tax increase to keep the homeless off our streets, out of our parks and riverbeds and provide them with one-stop services. Plus we’re providing the library that Santee residents have long sought, which this council has not found a way to fund.”

To show that the city’s derogatory “Klantee” nickname should be relegated to the dustbin of history, the complex will also have dedicated office space donated to civil rights groups and ethnic cultural organizations which will host performances on a stage in the Library Tower’s new community meeting room.

The new city hall will be easily accessible not only to hundreds of residents living onsite, but will also be reachable via bus and trolley transit for off-site residents and via live-streaming on the Internet.

Santee’s rebuilt Council chambers will come complete with reclining seats similar to those in upscale movie theaters, maximizing comfort for citizens attending lengthy council meetings. Waiters to serve the people will be on hand to take food and beverage orders for council attendees, delivered from a ground-floor deli and brewery.

Council chambers will be equipped with technology features to live-stream council meetings on social media and on closed-circuit TVs throughout both towers. Live videos will also give viewers the opportunity to vote in real time on whether they approve or disapprove of each councilmember’s statements and votes.

“Just like Pavlov’s dog, we believe the Councilmembers will learn to respond to positive stimuli and listen to the people they represent,” Dogooder concluded cheerily.

The worst part is true; for affordable housing some really do want to tear down the historic drive-in-theatre or barn. Let the Santee Drive-in stay and evolve with a contract with Sonic for refreshments plz