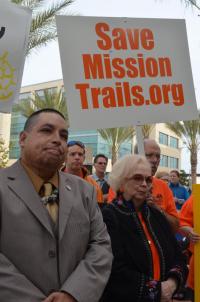 But according to Lane Sharman, co-founder with Bill Powers of the San Diego Energy District Foundation, a grassroots group trying to get community based utilities, this vote did something else. It added one more tax to your utility bill. Not only are rate payers to pay for energy distribution and transmission distribution, but now  a local generation charge as well. Effectively, ratepayers will be subsidizing utilities, according to Sharman.

ECM was able to talk to the organizers of the grass roots resistance before the CPUC meeting. Martha Sullivan disclosed that President Michael R. Peevey “has been angling for a third vote.”

She said that yesterday’s closed door meeting by CPUC commissioners with energy industry representatives could be a violation of the Bagley Act. Sullivan was worried before the vote that there would be a lot of arm twisting of other Commissioners to get a vote friendly to SDG&E. A judge ruled Monday that he lacked jurisdiction to block the meeting, though that decision is currently on appeal. Sullivan called the meetings without public access “arrogance.”

Stephen Houlahan, President of Save Mission Trails and a resident of Santee, said utilities are e brash in their treatment of the rate payer. For example, Pacific Gas and Electric took responsibility for the disastrous explosion at San Bruno in Northern California, but rate payers are still paying for it. 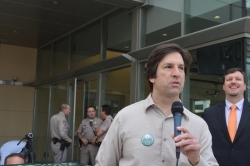 Pete Hasapopoulos of the Sierra Club (photo, right) told ECM that “unfortunately this has become a political football. The evidence clearly says the plants are not needed. It is clear that President Peevey wants to push one or more plants through.”

ECM asked if legal action was contemplated. Hasapopoulos admitted that this is possible “if they make the mistake of approving these plants.”

Patricia Bird from Logan Heights told ECM that the power plants “need to be stopped since they are going to affect the environment in a negative way. This is a grass roots effort where many groups are participating.” She pointed to Save Mission Trails, otherwise known as the Orange wave, San Diego 360, the League of Women Voters and others.

Hasapopoulos  addressed the crowd, about a hundred strong, before going into the hearing. He called for a shift away from fossil fuels and toward renewable resources.

He also talked about global climate change. “It is already affecting San Diego, with larger wildfires leading to home destruction. We are also going to lose beaches. We need permanent jobs, permanent green jobs… We need to keep the sea from rising, and taking away places like Mission Beach Park. We need an economy that does not destroy Mission Trails Park.” 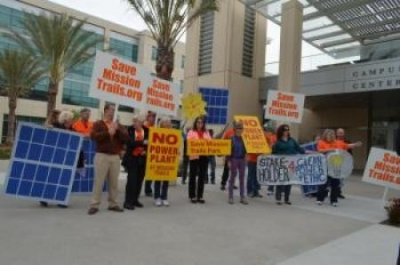 The Sierra Club leader added, “SDG&E is living in the past. Proposing fossil fuel plants is the work of a dinosaur. Solar is right now. We need local solar, not what benefits the shareholders of Sempra Energy.”

Houlahan told the crowd that he was proud of all who came during a work day to fight for this. He also reminded them that the San Onofre Nuclear Generating Station (SONGS) was off line last summer and our region did not suffer. “Sunrise power link did not make things better,” he said, adding, “We do not want a world destroyed slowly over corporate greed.”

Van Collinsworth with Preserve Wild Santee cited five delays in the vote, adding, “We need “the Commission to stand with the people. These power plants are not needed.”

He also said that the people of San Diego need to establish community energy districts.  This is the only way that we the people will make sure that these plants are not needed ever again, he indicated.

Before going in, Supervisor Dave Roberts addressed the crowd as well. He said, “hopefully they will listen to us.” He added that the County Board is united in this with the City of San Diego and that “the County has been updating the County Strategic Energy Plan….“We do not need these power plants, what we need is new ideas.”

It was standing room only and there was a problem with the sound system. This made it difficult for the Commissioners to be heard, and for the people testifying to be heard--including numerous public officials.

President Peevey gave 90 minutes for public comment before the vote. 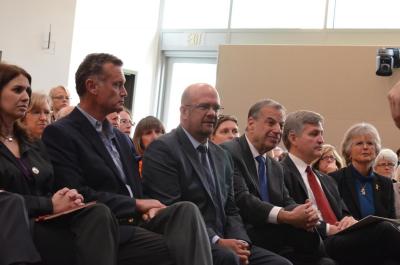 The first of the officials to testify was Supervisor Dianne Jacob. She told them that as Vice Chair of the County Board of Supervisors she represents 620,000 constituents, “I am here to oppose the Quail Brush Project.” She added that “elected officials were working together to resolve the issues, and to bring roof top solar.” She added that they wanted more options.

Quail Brush “is the wrong project in the wrong place, at the wrong time,”  concluded Jacob, whoadded that solar generation and fuel cells were the future. She closed by asking the Commissioners to “reject old school solutions.”

Commissioner Roberts came next reminding the Commissioners that between Jacob and himself they represented 1.3 million constituents. He added that “I am concerned about the impact of Quail Brush on my constituents.”

The eleven smoke stacks will also be a visual blight to the park. This would also push back “regional efforts to move towards alternative energy.”

San Diego Mayor Filner told the commission that he had “a green distributable renewable energy.” He had a “green vision.” He also told them to deny these expensive plants, and that “the time for fundamental change is now.”

San Diego Council Member Scott Sherman (District Seven) told the Council that he was not a politician, but a businessman, and that “there was an unanimous decision in the San Diego City Council against it.” He quipped that this was not easy.

Councilmember Jack Dale from Santee also testified that “the City of Santee was together with the City of San Diego on this. He added that “San Diego was for a new technology.”

State Senator Marty Block also had a representative tell the Commissioners that the Quail Brush plant was a bad idea, and in a bad location.

Citizens had a theme to their requests. They came down to not approving the plant for health reasons, and to let San Diego develop in a green way.

Rudy Reyes from Santee reminded the Commission that he was a Cedar Fire survivor  and that the area is very much fire prone. To put a plant there “is a bad decision,” he testified. “It is also not needed.”

Beth Price reminded them that their own studies “have not found a need until 2020.”

Phil Connor, the president of a home owners association nearest to the proposed site, asked President Peevey to recuse himself. Connor said that Peevey had met in private with applicants and “showed favor to the Applicants. Assure the public that there will be no violation of the public trust.”

James Edmonds told the Commissioners that he had solar on his roof. He reminded them that “Germany is producing more solar energy than we do as a country. But with leaders like Filner and Jacob we will get it done.”

Opposition, though overwhelming, was not unanimous among the citizenry. Johnny Wheeler reminded the Commissioners that San Onofre was offline and said he represented 700 businesses. He urged them “to rebuild the power grid.” Businesses depend on dependable generation.

Supervisor Greg Cox also urged the Commissioners to “approve the Purchase Agreement for Pio Pico. It is located appropriately. It is crucial for the development of the Otay Mesa.”

Charles Hughes agreed, and said that we “needed a reliable source of energy for our economy.”

David Secor, former Congressional candidate from East County, told the Commissioners “that there are two sides to every issue and then there is what is right.”  He  asked Commissioners to “put a stake in the heart of this monster and deny these power plants.” 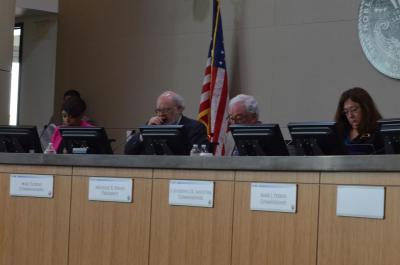 At the end of public statements it was time for the Commissioners to tell the people their reasoning. Mark Ferron was first. He told the people that there was a need for 280 megawatts by 2018. But he noted that the administrative law judge found that there was no need until 2018.

In his mind the expansion of the Escondido plant from 35 MW to 45 MW “is the easiest. It makes sense to go ahead with the Escondido plan.” He also explained that Quail Brush had not received a permit yet, but Pio Pico has. So if there is a need to move forwards, Pio Pico will be the easiest, that or a Carlsbad Plant that has already been permitted but not built.

This decision “is without prejudice.” He also said that San Onofre “has affected the whole region.” If the troubled nuclear plant remains off line, SDG&E will have to fill in the hole, said Ferron.

“Quail Brush and Pio Pico might help, but they are the wrong approach.” Though the CPUC denied Pio Pico and Quail Brush, Ferron left the door open, stating, “SDG&E has an opportunity to resubmit.”

Commissioner Michel Florio challenged citizens of San Diego in his statement. First, he stated, “Every member of this panel is a strong supporter of AB 32.” (This bill established renewable power mandates for the state.) But he added, “W have to face reality. I strongly support San Diego’s implementation of solar, but the sun sets every night. Energy drops off faster, and we need something to balance it.”

He urged the community to prove that either Pio Pico or Quail Brush will not be needed by developing the necessary technology to make them unnecessary. He said that the community had until 2015 or 2016 to accomplished this.

He added, “I challenge the community. The community was ravaged 13 years ago. We do not need a repeat of rolling blackouts. If San Onofre was there, we would not need to talk of new generation.” He also reminded them that the hard deadline is 2018 when older plants are set to be retired.

The vote to deny applications for Quail Brush and Pio Pico, for now, and to approve repowering of an idled Escondido gas plant, was unanimous.