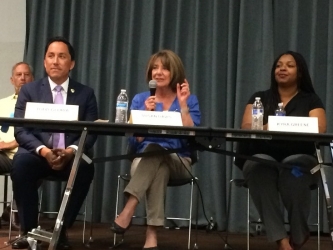 Congresswoman Susan Davis said she didn’t envision herself in public office but instead ran after getting heavily involved in the League of Women Voters, “I never saw myself in political office. Growing up, I didn’t come from a political family, but I did get involved in a fabulous organization when I came to San Diego after my husband was stationed in Japan and we didn’t know anyone.”

Davis said that she believes it is working in the community that prepares one to run for public office, saying, “I do believe that doing the things that you love in the community prepares people to run for public office. Then you have a cadre of folks they’ve worked with over the years. It’s through them that you’re encouraged and strengthened to run.”

Congressman Scott Peters said that he ran for City Council when no Democrat had ever represented district 1. “I just started knocking on doors and telling people I didn’t like the way things were going and I thought I had something to offer.” 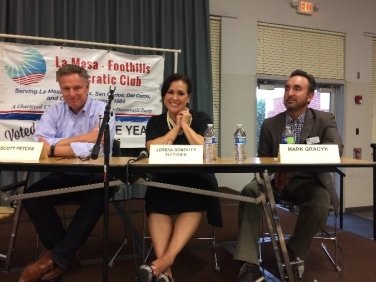 Assemblywoman Lorena Gonzalez Fletcher spoke of her time as a labor leader and of the discouragement she found in some elected officials once they took office. “…What would be discouraging was when we would elect people who were in progressive seats but they wouldn’t vote that way.”

Gonzalez Fletcher continued, and got the audience laughing, when she said, “I thought I’m never going to be happy with somebody unless I run myself. And I’m very happy to say I’ve been happy with every one of my votes.”

Assemblyman Todd Gloria spoke of his time with Susan Davis starting at the age of 14. “I think I’m a true benefit of mentoring. I’m the son of a hotel maid and a gardener. My parents were not registered to vote until I was helping Democrats register voters in 1992. This might not have been my natural path,” he added, but said meeting someone early on who would make connections helped inspire him.

Gloria continued, “To take the good morals and values my parents gave me and then to marry them with the information the education and the opportunities that Susan and the Price family gave me was really an E-ticket ride to public service, so I went to USD I graduated from there; then Susan got elected to Congress and she asked me to come work for her. And like many people up here, I was asked to run and my honest answer to them was that brown gay guys don’t get elected. I just wake up every day to make our state a better place to live, so I feel truly blessed to have this job and I thank you.”

Helix Water Director Mark Gracyk said that he started taking note of the Helix Water Board and was dissatisfied with the incumbent. “There was a really contentious meeting in October of 2015 and the current elected guy that I took on was very disrespectful to some of the people who came that night. There were about 200 people that came to speak and he was so disrespectful to the people who came to speak.”

Gracyk continued, “I got home angry and frustrated and my wife said, ‘Well, instead of complaining why don’t you do something about it.’ I said what can I do about it? And she said, ‘Why don’t you run for that seat?’” Gracyk did run, and won that seat handily.

Dr. Kyra Greene, Executive Director of the Center on Policy Initiatives said, “What’s so important about running for office is that what you need is to be a person that is embedded in a community, because the reality is what we see from outside working with these folks is that when they get into these jobs, there’s a real challenge.”

Greene concluded, “It’s not always about having the perfect pedigree or about knowing everything when you walk into the job--but there does need to be an issue that is important to you and the people who will stand behind you.”