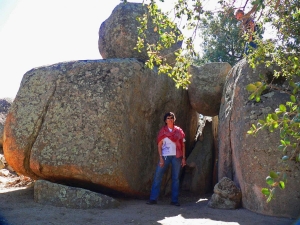 November 23, 2009 – It's not Plymouth Rock--but it may be the most dramatic natural setting in San Diego County to celebrate your Thanksgiving.

“When I saw this, I felt sure there were ceremonies here in ancient times,” said Sharon Courmousis, standing before a natural rock cathedral at Sacred Rocks Reserve in Boulevard. “I also felt a sense of sacred space.” Sharon and her husband, Dmitri, offer guests opportunities to nurture creative artistry, enjoy stargazing, stroll a labyrinth--and savor a Thanksgiving Day potluck amid a natural retreat complete with campground, cottages and a clubhouse for the feast. 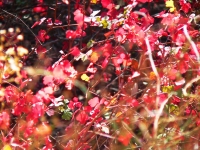 “The colors here are awesome,” Sharon said, taking me on a tour of the property now resplendent with fall foliage in brilliant scarlets, russet and gold hues.  But the most dramatic aspects of the terrain are the massive boulders strewn in formations as though by divine design. 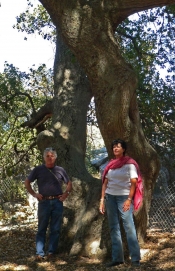 We walk through an ancient oak grove to a tree she’s dubbed “Grandmother Oak.” Gazing up through golden oak leaves fluttering against an azure sky, she added, “This tree is over 500 years old. One of our dreams is to build an artists’ colony up here for painters, artists of all kinds, and musicians.”

Atop a natural stargazing plateau, the area is silent save for the whistling of the wind. “In summertime, we have a light stick parade for kids,” she noted. “They hike around, then I make them all hide their lights and look up. It’s awesome. You can see the Milky Way.”

After traveling the world and having “seen everything,” Sharon and Dmitri purchased the property in January 2003. “Without him, this would not have been possible,” Sharon said of her husband. “I had the dream, and he had the execution—and he knows how to improvise,” recalls Sharon, adding that both grew up in rural areas. “We wanted our son to know what it’s like to be in the country…All we wanted was ten acres.”

Instead, they wound up with a 163 acre site formerly known as the Outdoor World RV Park and before that, a horse ranch that dates back to the 1800s. Sharon is research the history of an old adobe building on the site, which is rumored to have once been a stop on a stagecoach line. Above it towers a massive boulder known as “Bobcat Lookout Rock,” where wildcats are occasionally spotted. 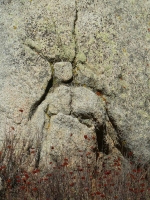 On a rock to one side of the boulder formation, a carving of a woman is intriguing. “My name for her is Sun Woman,” said Sharon, who has not yet been able to determine if the carving dates to ancient times when Native American tribes roamed this area.

She provides a naturalist lesson as we travel across the property, pointing out dried brown flowers. “That’s buckwheat. You can make tea or pancakes from it,” she said, also identifying sage, elderberries, and Indian stick tea. A surprising amount of colorful foliage can be found on the land, which sits atop a natural underground lake.

At the rock formation she deems a natural cathedral, she pauses to reflect. “Last summer, we held our first wedding here,” she said, then walks to a second unusual formation nearby. 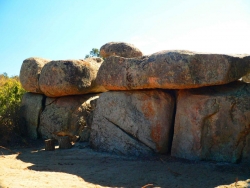 “We do drum circles in here. We’ve also done a photo safari,” she added, noting that mountain lion and bobcat tracks are frequently spotted on the site, though glimpses of big cats are rare.

Guests can also traverse a labyrinth modeled after the famed Chartres labyrinth.

“About five years ago, I became enthralled with labyrinths. We found a pattern on the Internet,” Sharon said, adding that the formation is based on “sacred geometry principals.” Ancient Christians believed that one lays one’s worries down as you walk to the labyrinth’s center to seek connection to a higher 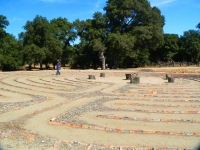 power; coming out signals a rebirth. The labyrinth at Sacred Rocks, built with Ladrillos bricks from Tecate, measures 1,570 feet, or 2/3 of a mile if you walk it in both directions.

A Boy Scout troop visited here recently, making an unannounced stop at a nearby Forest Service lookout. “They let them shoot water, and cooked in outdoor kettles,” Sharon said. Her son, now 13, has created a remote-control challenge track above the stargazing plateau.

Riding back in an open-air Jeep, we pass woodpeckers, a blue jay, and a flock of wild turkeys. 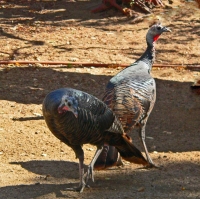 She and her husband have formed a 501c3 nonprofit organization, to further their dream of creating an artists’ colony with resident artists on the site. Meanwhile, they have already held several events to fuel the creative talents of their guests.

“Right now it’s a virtual artists colony. If you’re a Plein Air artist, you can come out and paint by moonlight,” she said. “The Burning Men have come out; they sing and play music all day and all night.”

On December 5th, a Writer’s Retreat will be held for authors, novelists, bloggers, poets, journal-keepers and lyricists.

Transforming the run-down RV park into a green and tranquil haven has been a labor of love. 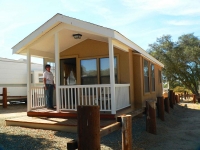 “Everything that could be broken was broken,” Sharon recalled. Dmitri, a contractor, and Sharon, a financial planner, have worked hard since then to transform the property into a campground with 200 tent sites, 146 RV sites, permanent residents who reside in park-model trailers with lofts, rental cottages, a bunkhouse, recreation center, pool/spa, and someday, an artists’ colony retreat. 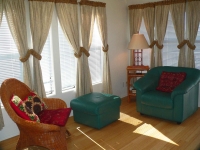 The property is also a showplace of sustainability. “Everything we could think of that’s green and affordable, we’ve done,” Sharon said. Cottages have solar panels, insulation, and eco-friendly materials. Comfortable and cozy, each with a Queen bed, cottages rent for $98 a night and come fully stocked with linens, pots and pans, and dishes.

Everything that can be recycled, is recycled. Fallen trees, cured and cut into log sections,”make perfect planters,” Sharon noted. 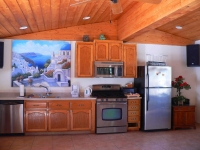 A large clubhouse features wood-burning stove, kitchen, and pinball machine. The clubhouse can be used by groups or, for this weekend, serve as a setting for a potluck Thanksgiving feast—Sharon and Dmitri provide turkey and ham, you bring side dishes and dishware. Behind the clubhouse is the backcountry’s only public pool (other than at Jacumba Hot Springs). The pool has a saltwater generator; soon solar heating will be added. 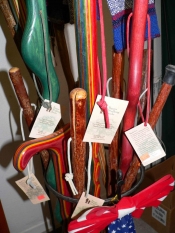 A gift shop features eclectic Western and Native American handicrafts such as Indian blankets and jewelry, as well as Australian drover hats, labyrinth key chains and an assortment of hand-made walking sticks crafted of hickory, cedar, oak and other woods.

“My favorite time here is winter,” Sharon mused, noting that the retreat gets snow only one day a year, on average. “You can walk and hike, and from the ridgeline, you can see the clouds dancing across the sky.”

Part of each week, Sharon resides in San Diego for her day job. But she admits, “Life in the country is different from life in the city – and it’s pulling me more and more.”

Some guests have purchased units to stay year-round, or have a seasonal retreat. Dmitri’s mother also lives on the property in a modest home where on my visit, a flock of wild turkeys bustled across the yard.

“People who come don’t want to leave, because it’s so peaceful,” Sharon concluded. “They come back again and again.” 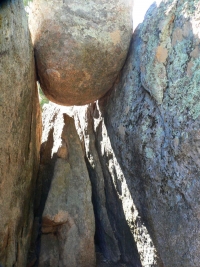 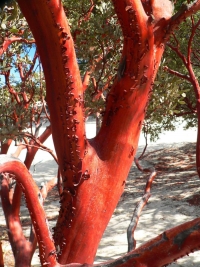 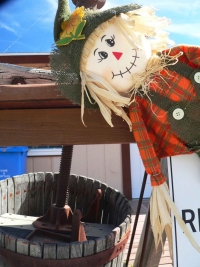 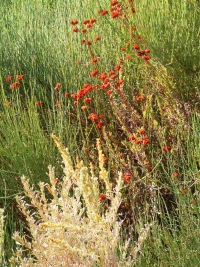 Sharon, your description of Sacred Rocks was powerful but even at that these pictures are amazing!! What a gorgeous, graceful place... so much like you in your role as hostess and guide.

With the busyness of this Holiday season, I encourage San Diegans to experience God's amazing creation at Sacred Rocks Reserve. It is a great venue to block out the cares of this world and focus on what is truly important. The native flora and fauna and natural rock outcroppings are awesome.