January 8, 2014 (San Diego’s East County) – Too often, media only reports the bad news.  But there are many unsung heroes , dedicated do-gooders and citizens work to make the world a better place, proving that dreams do come true, helping others, or simply offering inspiration to us all.   There are stories here that will tug at your heartstrings and, perhaps, move you to take action in some way.

Here are a dozen people and organizations who you may never have heard of; most are not famous, but all have stories worth taking to heart as we begin the New Year. 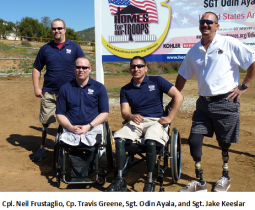 Army Sergeant Odin Ayala and Marine Corporal Travis Greene each lost both legs serving in combat. But they were all smiles on February 23 at the groundbreakings of their new , specially adapted homes in El Cajon-- thanks to the efforts of the nonprofit Homes for Our Troops.

The group has raised donations to help many wounded veterans, though many more still need help.  Since the September 11, 2001 terrorist attacks, at least 1,558 service members have suffered major limb amputations or spinal cord injuries.  Due to advances in battlefield medicine, more severely wounded soldiers are surviving now than in past wars.

“Our motto is rebuilding homes, rebuilding lives,” said Tim McHale with Homes for our Troops.  “George Washington said that our veterans returning from war will judge American on how they are treated when they come back.”

Did you ever have a childhood fantasy?  Not many manage to earn a living with something they’ve yearned to do all of their lives.  But Jeffrey Hedgecock of Ramona has done just that.

Fascinating with medieval pursuits as a youth, he started an armor-making business after getting an art degree—and continues practicing the ancient trade today. He went on to establish an international jousting organization and founded what is now called Tournament of the Phoenix (after rising from the ashes during the 2007 wildfires here).

He competes in jousting competitions for the glory –since there are no money prizes. He selects competitors with care, concerned not only with skill, but the trustworthiness of those chosen.

How can one not be inspired by a knight in shining armor who aspires to restore the values of chivalry in our modern world? 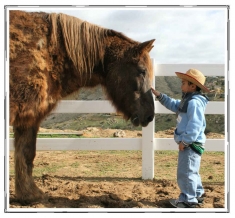 Kathy Plaisted works miracles of sorts at Rockinghorse Ranch in El Cajon, pairing up troubled horses with abused and neglected children.  The program helps all to heal, serving 500 people each month.

But the owner of the property where the ranch is located wants to sell the land, so Plaisted has been raising funds in hope of acquiring land elsewhere.  To date she’s raised nearly enough to cover monthly operating expenses, but is still hoping for a grant or angel donor to help purchase land, so she can continue helping children and horses who have suffered pain, neglect and abuse. 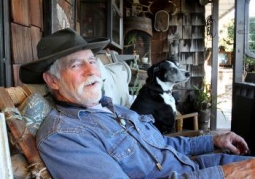 Thomas Weller, known as the San Diego Highwayman (www.sandiegohighwayman.com) has been helping distressed motorists for almost 50 years. This good Samaritan never accepts payment for his kind gestures – which include providing gas for empty tanks to replacing batteries to fixing flats. Instead, he hands each motorist a card with the following inscription:

“Assisting you has been my pleasure. I ask for no payment other than for you to pass on the favor by helping someone in distress that you may encounter,” he says. 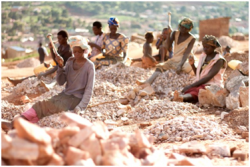 Disturbed to find war refugee women in Uganda toiling in a rock quarry for a dollar a day, James Pearson, who lived in Jamul at the time, brought jewelry that they made back to America.  He started a Fair Trade business and was soon selling colorful jewelry made from recycled paper in gift stores and galleries across America.  Today, he employees 28 women in Africa – each making higher wages than  school teacher .  All have been able to quit working in the rock quarry and support their families off of their jewelry creations. 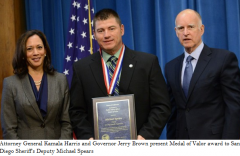 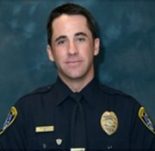 Sheriff’s Deputy Michael Spears and San Diego Police Officer Michael DeWitt risked their lives to save two deputies who were shot and wounded by a child molestation suspect in Lakeside in late 2012.  The deputies, Ali Perez and Craig Johnson, both survived thanks to their colleagues’ heroism under fire. A year later, in September 2013,  Governor Jerry Brown and Attorney General Kamala Harris presented the Medal of Valor – California’s highest law enforcement award – to Deputy Spears and Officer DeWitt for their courage above and beyond the call of duty.

“Character, leadership and being able to act in difficult and uncertain circumstances – that’s what we honor today,” said Governor Brown. “These are the kind of values that we absolutely need to have a society that holds together.” 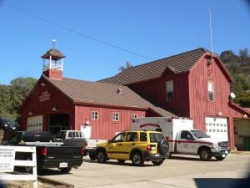 Julian Cuyamaca Fire Protection District’s Acting Battalion Chief Cris Cornette sent a blistering resignation letter to the District’s Board last March, faulting Board members for not fighting to prevent a County takeover of the all-volunteer Department.  He and many residents feared that a takeover could lead to longer response times in this rural mountain town.

His action helped prompt a community outcry that ultimately led an anonymous donor to step forward and stem a gaping budget gap, enabling the board to vote to keep the District independent. 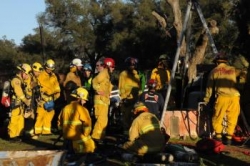 After falling 35 feet down a well at his father’s home in Potrero, truck driver Jerry Fowler prompted a dramatic rescue involving specialized rescue units racing against time as water began filling the well where Fowler was trapped, unconscious.  But his ordeal didn’t end there.   His heart stopped n the way to the hospital, but paramedics revived him.

He faced months of surgeries and rehab, suffering serious injuries to his head, spine, ribs and legs, also losing most of his vision and hearing in one ear.  His ordeal galvanized this small community to pull together and raise funds to help the family, since Fowler had no medical insurance and over a million dollars in medical bills. He is now on permanent disability, but thankfully he suffered on brain damage, he is walking, talking, and is grateful to be back home with his family.

Donations to assist the family with medical bills may be made payable to the Potrero Community Center Foundation (PCCF) and sent to PO Box 116, Potrero, CA  91963. Specific that the donation is for Jerry Fowler.  Donations are tax deductible. 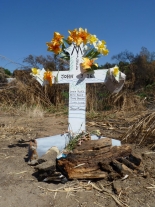 Beside the scorched earth where Michele St. Clair was found severely burned during a brush fire on May 12,  2013 her friendse created a makeshift memorial . Flowers, crosses,  ragged stuffed toys and a hand-lettered sign  reveal how she touched the lives of those who came to know her.

St. Clair, a Navy veteran who by all accounts worked hard to earn money, refused to take handouts, and was not an addict or an alcoholic.  In short, she did not fit the negative stereotypes of homeless people. Her death raised troubling questions, such as why doesn’t the County run a shelter in East County for homeless people?

A measure to increase funding for homeless veterans was approved by Congress shortly after St. Clair’s death.  But, a Homeless Bill of Rights failed to win passage that same week in the California Legislature, postponed until 2014.

The bill would have prohibited the criminalization of homelessness--laws passed in some local jurisdictions making it illegal for homeless people to sleep in public places such as parks or civic plazas.  These laws , along with lack of shelters, force those with nowhere else to go into unsafe places—such as the tinder-dry brush along the Lakeside riverbed where Michele St. Clair lost her life. 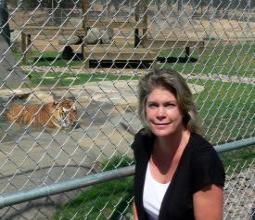 Bobbi Brink, founder of Lions, Tigers and Bears in Alpine, is a tireless dynamo.  She started the rescue facility to help exotic big cats escape horrific conditions at the hands of private owners.   In the past year, she’s expanded her vision to bring rescued bears to the sanctuary, building ever larger shelters for her growing menagerie.

On January 1st, her sanctuary’s most famous resident, a bear named Meatball, gained fame with a Rose Parade float in his honor.