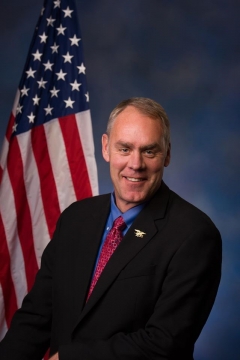 January 17, 2017 (Washington D.C.) – In a confirmation hearing today before the Senate Energy and Natural Resources Committee, Representative Ryan Zinke, Donald Trump’s nominee for Secretary of the Interior testified, “I want to be clear about this:  I am absolutely against the transfer or sale of public lands.”

If confirmed, Zinke would be in charge of managing hundreds of millions of acres that belong to all Americans as National Parks, Bureau of Land Management lands and National Wildlife Refuges, as well as conserving western water resources.

Zinke also took a stand that’s polar opposite of Trump’s climate change denial.  Asked about Climate Change, Zinke told committee members, “I don't believe it's a hoax.”  The Montana Republican cited shrinking glaciers in his home state’s Glacier National Park as evidence. He added that “man is an influence” on climate change, and that the only debate is how much that influence is and “what we can do about it.”

His most important priority, however will be to “restore trust” between the Interior Department and the states and Native American tribes it serves.

Zinke is a self-described fan of Theodore Roosevelt fan and Trump has said his Administration would honor the legacy of Theodore Roosevelt. During his presidency, Roosevelt cemented his legacy as conservation hero by establishing 150 national forests, 51 federal bird reserves, four national game preserves, five national parks and 18 national monuments on over 230 million acres of public land.

Chris Wood, President and CEO of Trout Unlimited, a fisheries conservation organization, said the hearing “sheds some early light on the Trump administrations priorities. Most important for sportsmen and women is that the Secretary of Interior champion clean water, healthy habitat, and keeping public lands in public hands.”

Zinke feels so strongly about not selling or giving away public lands that he resigned as a delegate to the Republican National Convention last summer because of the party’s position in favor of land transfers to state or private groups.

However, he drew fire for his vote earlier this month in favor of a measure from House Republicans that would allow federal land transfers to be considered cost-free and budget-neutral, making it easier for drilling and development.  According to the Associated Press, Zinke has said he would have voted against the provision if it had been a stand-alone bill.

Zinke voiced support for using scientifically based management as well as safeguards such as the National Environmental Policy Act to protect clean air and water, but also said supports some mining of coal and oil on some public lands.

He also vowed to make tackling a $12 billion backlog in maintenance and repair in our national parks and other public lands part of Trump’s infrastructure improvement plan. Such disrepair has eroded public trust and fueled calls for transferring public land into private hands, he said of some officials in Western states, where the federal government controls nearly one third of all lands. He said states should have a voice on monuments designated in their states.

Wood says he looks forward to working with Zinke, if confirmed, noting that while challenges facing public lands today have changed from Roosevelt’s era, the need to protect and restore fish and wildlife habitat remain.  He concludes, “America’s public lands need to be managed in ways that ensure we pass them along to the next generation healthier, more productive and more diverse than they are today.”