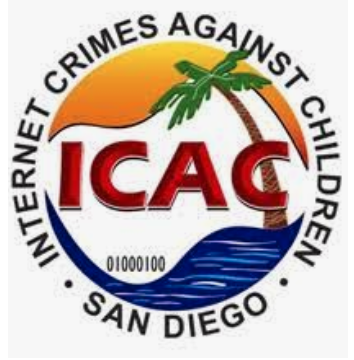 May 16, 2022 (San Diego) -- With the internet came all sorts of crimes into our homes by way of our own computers. It can be a doorway to a very dark place, and that’s the reason ICAC--Internet Crimes Against Children-- came into being. Getting the money to keep it operational is important to those concerned about the issue, like North County resident Julie Levi who wondered “why is the governor not funding the ICAC Task Force?  If you have any insights, I’d love to hear them!"

The good news is the funding from the state has been restored. But there is no guarantee for the years to come. This funding cutoff is the rule, not the exception, in California. Detective Sgt. Garrick Nugent of the San Diego Police has been the region’s task force commander for two years.  He says his experience,  as well as his predecessor’s, was that ICAC was threatened with removal “from the state budget each and every year."

In an effort to have the funding reinstated, all five California ICACs made a concerted effort to launch public campaigns “imploring our local and state legislatures to encourage the Governor to reinstate the funding.” That's the reason for the website posting that activist Levi asked about.

Nugent is elated to report late last week that “the funding has been reinstated.  If approved as is, the California ICAC task forces will be able to continue doing what they do best, protecting children from online predators."

"It's so important the work they do." says Marisa Ugarte, the executive director of the Bilateral Safety Corridor Coaliton.

Ugarte says the multi-agency task work allows them to "track pedophiles all over the world, which is especially important to San Diego, so nearan international border. The pedophile networks are  world-wide but the largest group of buyers is in the United States.  But pedophiles have active rings in China, Europe, Mexico, everywhere.  When ICAC makes arrests they get everyone; the buyer and the seller and that's good."

ICAC was originally created, says the U.S. Office of Juvenile Justice and Delinquency Prevention, because an increasing number of children and teens are using the internet at a time when there is a " proliferation of child sexual abuse images available electronically, and heightened online activity by predators seeking unsupervised contact with potential underage victims.”

While parents are constantly reminded of the importance of monitoring their children's internet habits, the fact is these crimes continue to threaten innocents.

Since the national program's inception, the OJJD says more than “826,700 law enforcement officers, prosecutors, and other professionals have been trained on techniques to investigate and prosecute ICAC-related cases.”

The City of San Diego’s website has a warning for parents that is as timely as it was in 1998 when ICAC was created.

“The internet has opened up a world of information for anyone with a computer and a connection!  Your children will learn about computers.  But just as you wouldn't send children near a busy road without some safety rules, you shouldn't send them on to the information superhighway without rules of the road.  Too many hangers from pedophiles to con artists can reach children (and adults) through the internet.  Direct supervision and involvement is the most effective means of addressing the problems presented to children using the internet.”