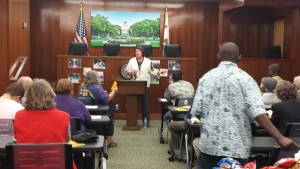 Among the honored patients were Minh and Hue Nguyen. Minh and Hue have been married for over 20 years. Mrs. Nguyen says, “I take care of him and he takes care of me.” Minh and Hue both speak Vietnamese, and understand and speak English less than well.  In 2012, Minh endured two procedures to correct an initial incorrect surgery at Sharp Memorial Hospital.

“Not until after the second procedure were we given an interpreter,” she said. “The interpreter told me to call a priest to read Minh his last rights…The interpreter gave us her card to use if we needed more help.” Minh recovered at the hospital, all the while with Hue at his side.

“He would not eat. No one at the facility spoke Vietnamese, so I was the only one who cared for him,” she said.

Hue recalls an instance at Sharp when one of Minh’s surgical openings began to leak a yellow discharge. “I immediately called the interpreter who had given us her card and I could not get an answer.”

Hue was unsure of how serious the discharge was until her husband started shaking. Hue ran to the receptionist’s desk yelli

ng the only English word she knew:  “Help!”

The receptionist told Hue to call the interpreter. The interpreter arrived an hour later. Minh’s dressing and state was not stabilized until five days after the occurrence.

As California prepares itself for the implementation of Affordable Care Act, millions of California citizens will be entering into the expanded Medi-Cal program. It is estimated that approximately one and five Californians speaks English “less than well”. About 3 million Medi-Cal patients will need language services over the next five years.

At Friday’s event, Assemblymember Atkins, who has been a champion for AB 1263, asked the Governor to sign the bill that would immediately accept all available funds to for more medical interpreters.  AB 1263, sponsored by Speaker John Perez, would draw down funds from the Affordable Care Act to create Communi-Cal, a state-wide interpreters program for Medi-Cal patients.

The $270 million  would help create an estimated 5,000 to 7,000 jobs in the state over the next three years. It would also create a state-wide standard for interpreters working with Medi-Cal patients.

Assemblymember Atkins thanked her colleagues in the state Legislature for supporting AB1263 but cautioned the work is not done.  AB1263 now sits at Governor Brown’s desk. He has until October 13, 2013 to sign it.