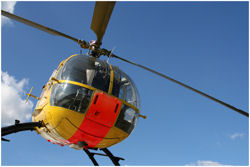 July 25, 2012 (San Diego’s East County) – The San Diego Sheriff’s office responded to a 911 call Monday at 5:17 p.m. regarding a female hiker who reportedly had fallen off a rock while hiking at Three Sisters Falls.  Law Enforcement and Fire/Rescue resources were dispatched to the scene. These resources consisted of a Sheriff's Deputy, a fire/rescue helicopter, A Sheriff's Department law enforcement patrol helicopter, as well as engine companies from the U.S. Forest Service and CAL FIRE.
Once on scene, fire personnel located the female hiker on the trail leading up from Three Sisters Falls to the Julian Trailhead. “They determined the female was not injured, however, she was extremely intoxicated. Fire personnel assisted the female to the trailhead, where she was evaluated by Sheriff's personnel and placed under arrest for being drunk in public,” said Sgt. Mark Johnston.
Three Sisters Falls is a popular hiking destination in the back country of San Diego County. It is remote and very rugged and not for the inexperienced or novice hiker, officials warn. During the summer months, temperatures can easily exceed 100 degrees Fahrenheit and hikers should carry plenty of fluids to stay hydrated. The consumption of alcoholic beverages is not recommended since it is a diuretic and causes dehydration.
Each year, the Sheriff's Department and fire personnel respond to dozens of rescue calls throughout the County of San Diego. Typically, rescue calls require a response from multiple agencies to be prepared for any scenario, which tie-up valuable resources and personnel. The Sheriff's Department would like to remind the public to be prepared and responsible.