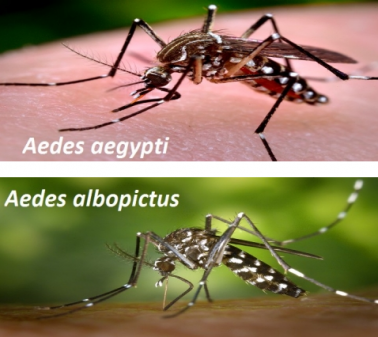 October 2, 2017 (Mt. Helix) – After numerous residents on the Mt. Helix Next Door forum complained of swarms of small, aggressive mosquitoes biting during daylight hours and often, indoors, East County Magazine contacted County Vector Control. We learned that the invasive Aedes mosquitoes have been found in 273 traps at 23 different locations between January 1st and September 21st this year.  View map.

These non-native mosquitoes can transmit Zika Virus, Yellow Fever, Dengue Fever and Chikungunya if they first bite a returning traveler infected with one of these diseases, which fortunately have not been found recently in California.

According to the U.S. Centers for Disease Control, they can also carry West Nile Virus, which does occur locally, though it’s more commonly transmitted in the San Diego region by our native Culex mosquitoes.

Aedes aegypti and/or Aedes aldopictus mosquitos have spread rapidly since their discovery in our region within the past several years. They have been found as far east as Lakeside, as far north as Oceanside, and as far south as the international border, with clusters in San Diego, La Mesa, Lemon Grove, Mt. Helix, Santee and many other communities.

County Vector Control will conduct an inspection for any resident who requests help to identify the breeding source of Aedes mosquitoes.  (To request an inspection, click here.) “Since they are likely only to fly 150 meters, the sources are often very close to where they are observed,” Jessica Northrup, county communications spokesperson, told East County Magazine in an email today.  “We encourage all residents to dump any standing water inside or outside of their house, which can serve as a mosquito breeding site.”

The County will not conduct an adult mosquito control program, however, unless there is an elevated risk of a mosquito-borne disease, Northrup said, adding that no such risk at been identified at this time.

Public health hazard or not, the aggressive mosquitos are making life miserable for some East County residents.

“These mosquitoes are new and they suuuuuuuck. Literally,” says Erin Pettit of the La Mesa Grossmont Summit area, who confirmed to ECM that Vector Control identified the Aedes mosquitos plaguing her property.  He suggested she purchase Mosquito Bits (available on Amazon.com) for plants and bird baths s a biological control.  “Yay! So far, much better. Gave it to my neighbors, too. They’re all on board,” she posted on the Mount Helix forum.

A Mt. Helix resident wrote, “These mosquitoes are out of control right now…My family is getting eaten alive…”

Residents who live near Renette Park and Harry Griffin Park in East County also complained of problems with the tiny mosquitos.

A La Mesa Village resident wrote that “this is the worst year I have ever seen in La Mesa” for mosquitoes. A second Village occupant called the infestation “horrible” adding, “They are inside and outside the house.”  Others reported similar issues; one wrote, “Never before have I had this many bites…they are small and get in my apartment.”

A La Mesa Village parent of a child at Rolando Elementary says she took her son to the school nurse for itch cream.  “She said they are even worse in the Rolando area.”

A Fletcher Hills resident reports that despite being careful about standing water, “We are even getting bit during the daytime on our patio. Ugh!!!”

A woman on Mt. Helix said, “I also am getting eaten alive!”  She described the mosquitoes as “little swarming gnats.”

The mosquitoes can breed in as little as a thimbleful of water, so its important to dump out all standing water and change water bowls for any outdoor pets daily.  The county offers free mosquito fish for ponds and has a hotline to report green pools or other sources of standing water.

Here are more tips to avoid being bitten:

Put screens on windows and doors.  Invasive Aedes mosquitoes can live and breed inside homes.

Wear long sleeves and pants. Invasive Aedes mosquitoes are aggressive biters both indoors and outdoors, especially during the day.

Apply DEET to clothing, not your skin. Wear a hat or scarf with DEET and you will repel the insects. I have done this and it worked.