January 26, 2021 (San Diego) – The invasive South American palm weevil has destroyed an estimated 10,000 palm trees in our region, according to researcher Mark Hoddle at the University of California, Riverside.  Locally, it’s been found in El Cajon, Bonita, San Diego and So

uth Bay communities. Left untreated, it will ultimately kill the trees best known for lining waterfronts along some of San Diego’s most prominent destinations.

The adult weevils are black with wings and measure about an inch and a half long. Larvae are white and pupate in fibrous brown cocoons in the infested crown of the palm tree, or in tunnels drilled by the insects. into the base of palm fronds.

Early symptoms include damage to fronds emerging from the center of the crown; leaflets may appear clipped or notched. .Once the palm heart is heavily damaged, the crown may tilt, appear collapsed, detach from the trunk and drop to the ground, posing a hazard to anyone underneath.

Thus far, the only way to save the palms once infested is to apply systemic pesticides on a regular basis, though this may pose hazards to any wildlife that feeds on any part of the palm. Testing of several pesticides is currently underway. Consultation with an arborist is recommended. Removal of an infected palm tree is another option. Residents are asked to report any palms suspected of having South American palm weevils.  Click here to report an infested palm.

Besides posing a threat to ornamental palms, state agricultural officials are concerned that the pest could spread to the Coachella Valley or other commercial date growing areas, which produce $68 million worth of dates annually in California. 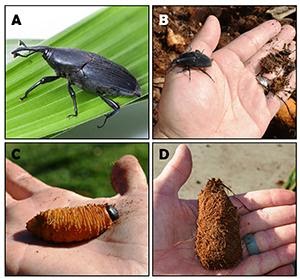