July 22, 2014 (Ocotillo)—A Summary of Violations has been issued to Ocotillo Wind Express (OWE) for alleged violations of state law due to hydraulic oil leaks observed during a complaint investigation, Sandy Nax at the Department of Toxic Substances Control with the California Environmental Protection Agency in Imperial County confirmed today. 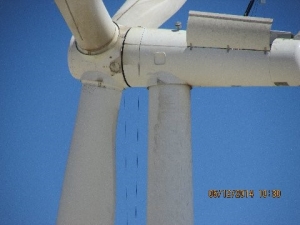 The confirmation came in response to an inquiry from East County Magazine to Roger Vintze at the department, asking what steps the environmental agency is taking to address complaints and photos from residents documenting hydraulic fluid leaks from gear boxes at numerous wind turbines in the project.

Residents have documented oil leaks at over 40% of all turbines on the project. Now, they are voicing concerns voice concerns that oil leaks could contaminate the town’s only supply of drinking water.

“We worry that in time it’s only going to get worse as these turbines age,” said engineer and Ocotillo resident Jim Pelley.  He fears that in the future, turbine leaks could pollute the federally protected aquifer, or underground water source.  “No water – no town.  If the water gets polluted, all homes in Ocotillo could be red-tagged,” said Pelley.

Nax said a Summary of Violations is “more formal than a citation” and that OWE is “addressing” the alleged violations. “We are continuing the complaint investigation on these allegations and other violations,” Nax said. 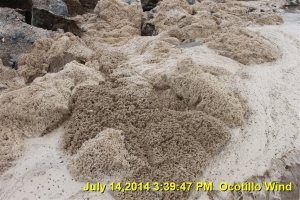 Nax added, “We have directed OWE to remove the contamination containing used oil and handle it as hazardous waste. WE also asked OWE for an explanation as to why the oil is being released, and to remove any additional oil as it is discovered.”   OWE has also been asked to supply the state agency with the Material Safety Data Sheets for the hydraulic oils.

Despite residents’ understandable worries over water quality, when asked if water in Ocotillo has been tested recently to see if these oil leaks have gotten into the water supply, Nax replied, “No. The groundwater depth varies in the area (it is as deep as 300 feet on the western edge), but our investigation has not revealed evidence that it moved beyond the surface.”

It was not clear how, without testing, the agency can determine that none of the clear hydraulic oil has penetrated deep below the water’s surface.

Thus far, the state has not made a finding of an imminent threat to public health and the environment. But Nax added, “If this changes, DTSC could move to require that OWE cease operation of one or more turbines.”

Park Ewing, a former construction manager who lives in Ocotillo, estimates that least 40% of the projects 100 or so turbines have oil leaks at any one time.  “We began noticing oil leaks running down the towers from the nacelle,” he said. “Turbine 91 was the first of many oil leaks to follow. Recently we have seen a different oil leak that comes from the hub and runs down and around the blades.” He listed some of the worst turbine oil leaks, with photos and turbine numbers to document the evidence at approximately 40 turbines.

Ewing added, “I believe all of the turbines leak oil,” though not all are doing so presently since some have been repaired or recently had new gear boxes installed. “The oil is very clear and normally becomes easily visible when the blowing sand and dust sticks to the oil.”

Pelley said a company called Sky Climber has been hand-cleaning turbines “just about every day,” adding that it can take 4 to 5 days to clean those that are severely soiled especially if oil is on the blades.  The area has been plagued by severe dust storms, leading Pelley to speculate, “It appears that the heavy dust storms are affecting the turbines,” adding that many leaks appeared after the dust storms, along with “grease spots on the towers.”

Residents also allege that workers for Siemens, the turbine manufacturer, attempted to cover up the oil leaks.

On November 5, 2013, Pelley observed, “Yesterday, Siemens workers were seen with shovels covering oil that had been sprayed out of wind turbine #11. The oil was seen in an area approximately 50 x 50 feet or more on the turbine pad and out into the undisturbed desert. The workers were working in the restoration area that is clearly marked to stay out. Today, I was at this site and I could actually see oil running down the tower while the turbine continued to run.”

Another local photographer has documented yet another source of oil leak, sending  a photo showing a water truck on the project site leaking oil, with "no oil pan under the truck."

Pelley responded, “It seems like the workers have absolutely no concern for oil or diesel spills from what I have seen.”

Oil isn’t the only chemical contaminant plaguing neighbors of the wind project.  The same state environmental agency has previously confirmed that a white, sludgy foam seen washing across the desert, streets and lawns in Ocotillo during construction was a dust suppression chemical. 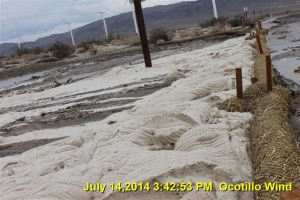 Last week, on July 14 Pelley sent photos showing a similar occurrence, with masses of the foaming, brownish-white sludge massed around turbines and across the desert flow, also flowing down waterways that feed into the town.   Yet to date, no cleanup has been ordered of this contaminant either, despite the fact that the chemical become flammable when it dries out.

Edie Harmon, a biologist and Ocotillo resident, wants to know why so many turbines are leaking oil and being replaced less than two years after the project was built.  “Somehow the concerned public deserves honest answers,” she writes, “because these monster machines are located on the federal public lands managed by the Bureau of Land Management (BLM).”

Residents have tried complaining to the BLM.  Ewing observed, “We can’t get any help out here.”  One BLM employee, asked about the leaks, referred residents to a public relations office for the Bureau.  “This guy is a temporary employee and scared to death of losing his job,” said Ewing.

Pelley said he and other residents have complained to “just about everybody we could think of” including the county, federal BLM officials, an environmental justice task force, and the state environmental agency. “Typically, we don’t get any replies back from our e-mails.”

Though the complaints have been well-documented with photos and videos now for many months, still the turbines remain in operation, spewing oil into the environment and white sludge with seemingly every major rainfall—all atop the town’s only source of drinking water.

I am too familiar with the Ocotillo wind farm, and spent several weeks working the site. They have had their fair share of legitimate problems, starting from day one. National park lands and requiring special permits and hoops to jump through, approvals at all levels. Once construction started it was discovered that there were several Indian burial sites and more hurdles to overcome. Siemens was using a new turbine blade design on this project and during the middle of the night one of the blades came loose and crashed to the ground. The site was shut down for several weeks as engineers tried to explain the incident. The blades then had to be modified to correct for the engineering flaw in the design. Once we completed these modifications the park was back up and operational. They have a few other incidents on site, and more problems than most. The biggest problem they face is the two retired engineers that have nothing better to do than give the site a bad name. Techs that have to work here are warned that they are being watched by these two nearly every minute of the day. Like vultures waiting for something to go wrong and begin their decent. They work effortlessly in turning molehills into mountains to try and rid the area of turbines. True there are occasional leaks from the turbines, but what you are seeing on the exterior is not hydraulic fluid or even gear oil. What you see on the blade root and tower section is grease, yes grease. Grease from the yaw and pitch systems, and with the temps in Ocotillo hovering around 125*F grease runs. With the concrete pads being 15 feet deep and 30 feet across, and small spill would be cleaned up without any risk of water contamination. Don't believe everything you hear. Usually they have been blown out of proportion as in this case.