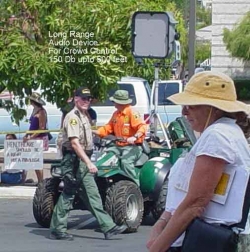 July 9, 2010 (San Diego) – East County Magazine added another award to its growing list of honors last night at the Society of Professional Journalists awards banquet at the Bali Hai restaurant in San Diego. SPJ-San Diego presented ECM with a first-place award for investigative reporting in the daily news reporting category.

LRADs have directional sound loudspeaker capability that can be useful in search and rescue as well as crowd control situations. But the devices have gained notoriety for their ability to damage hearing and cause other health impacts. They have been used to repel pirates on ships at sea and to control terrorists in the recent Iraq and Afghanistan wars, and they are listed as weapons by the Department of Defense.

East County Magazine wishes to thank Liberty One Radio, which tipped us off about the LRAD and provided a photo showing the device positioned close to a large crowd at a healthcare rally. Our investigation also revealed that the Poway-based manufacturer was willing to sell the device not only to law enforcement, but also to private companies, lifeguards, and even a radio station seeking a crowd control method for concerts.

Our story sparked concerns from both conservative and liberal groups  concerned about the potential for such devices to be used against civilians on U.S. soil. Shortly after our story ran, in fact, an LRAD was deployed against a civilian crowd of demonstrators during the a G-8 conference in Pittsburgh.

Our story received nearly 39,000 reads, drawing comments from around the world. Controversy over the devices led to Sheriff Gore calling a press conference to announce that he had disabled the device, as we reported.   The manufacturer also removed specifications about the device from its website that had been available for public view.

However, ECM later discovered that the press release announcing the disabling had been removed from the Sheriff’s website a few months later. The Sheriff did not respond to our inquiry asking whether the device remains disabled.  Nor would the Sheriff reveal details of how the weaponized capability could be disabled without also losing the device's other functions activated by a simple on-off switch.

A poll of ECM readers found that 68% percent believe there should be restrictions on sale of sonic weapons.