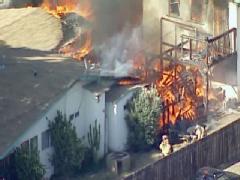 July 9, 2011 (La Mesa) – Fire investigators remain on the scene this morning of a fire that started in an apartment building late yesterday and spread to a nearby home t 4759 70th Street.

“The home and rear apartments are considered a total loss,” said Monica Zech, public information officer for Heartland Fire & Rescue. In addition, Zech informed East County Magazine, “The exact cause of the fire is still not determined—but the fire appears to be suspicious in nature.”

An arson K-9 unit from San Diego Fire requested by fire investigators was called to the scene today. “The dog will be sniffing for any accelerants—any signs of possible flammable liquids,” said Zech.

Firefighters have not yet been able to enter the structures due to poor conditions caused by clutter and hoarding issues in the home as well as in garage areas of the rear apartment units, Zech said today. There were also several abandoned vehicles scattered throughout the property.

“This property has had code enforcement issues,” Zech disclosed in an e-mail response to questions from ECM. “The residents in the rear residence were in the process of being evicted,” she added.

“It’s basically a flop house for street people,” Sgt. Brett Richards with the La Mesa Police told ECM this evening. “There have been several arrests in the past."

Asked about posts on other media sites by neighbors who said they suspected a meth lab on the premises, Sgt. Richards responded, “We’ve investigated the meth lab allegations but no meth lab was ever found.”

Zech indicated that hoarding is a growing concern that poses a hazard to firefighters as well as occupants. “This type of clutter not only creates egress and ingress issues for evacuating occupants, but it can also delay fire crews from entering the structure,” she noted, adding, “Exits are often blocked and rooms are filled to the ceiling with stacks of belongings that can easily fall over and entrap firefighters.”

Due to the intensity of the fire and lack of access, crews took a defensive stance, pouring water from above using two ladder trucks, assisted by seven engines. A total of 30 firefighters battled the blaze including crews from Heartland Fire & Rescue in La Mesa and Lemon Grove, Santee Fire, and San Diego Fire.

“This fast attack kept flames from reaching nearby homes,” said Zech, who said damage is estimated at $600,000.

Residents evacuated safely, along with animals on the premises. There were no injuries to firefighters or residents.