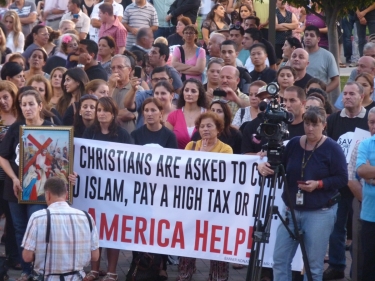 January 4, 2019 (Washington D.C.) – One of the last acts of the outgoing Congress in 2018 was passage of H.R. 390, the Iraq and Syria Genocide Relief and Accountability Act. The measure passed the House and Senate by unanimous consent and was signed into law by President Donald Trump on December 11, 2018.

The new law could impact familes, friends and loved ones of tens of thousands of Iraqi and Syrian immigrants and refugees who now call San Diego's East County home.

The action came shortly before President Trump ordered a pull-out of troops from Syria, against the advice of his generals and top security advisors. It is unclear how the troop withdrawal may impact implementation of the bill’s provisions.

The measure introduced by Rep. Chris Smith (R-N.J.) with a bipartisan group of 47 cosponsors aims to help rebuild Christian and Yazidi communities in Iraq and Syria devastated by years of war and destruction by Islamic State (ISIS).  The bill provides funds to entities including faith-based organizations that are assisting with the humanitarian, stabilization and recovery efforts in Iraq and Syria to the region’s religious and ethnic minorities.

It directs the Trump administration to “assess and address the humanitarian vulnerabilities, needs, and triggers that might force these survivors to flee” the area, and to identify potential warning signs of violence against religious or ethnic minorities in Iraq and Syria. In addition, the bill provides for support to entities conducting criminal investigations into crimes against humanity and war crimes in Iraq perpetrated by ISIS members. It also encourages foreign governments to identify suspected ISIS perpetrators in a database to be used for security screenings and to aid in their capture and prosecution.

ISIS forces had ordered minority religious members including Christians and Yazidis to convert to Islam or pay a high tax. Many were killed, tortured, or forced to flee. Yazidi women and girls were kidnapped and forced to marry ISIS members, serve as slaves or be killed. Religious sites such as churches were destroyed and in some cases, priests and other religious leaders were slaughtered.

“The fact that this bill passed both the House and the Senate unanimously shows that the American response to genocide transcends partisanship and that there is enormous political will to protect and preserve religious minorities in the Middle East, including Christians and Yazidis, who were targeted for extinction,” Knights of Columbus spokeseman Carl Anderson upon the bill’s passage, Catholic News Agency reported.  He testified to Congress that Knights of Columbus has provided some $20 million in aid to survivors of ISIS attacks.

Chaldean Archbishop Bashar Warda of Erbil in Iraq told Catholic News Agency that Christian and Yazidi populations have been decimated and that Christians are still struggling, without resources to rebuild their homes, despite liberation of their region. Lack of jobs has also led many to flee their homeland for opportunities elsewhere.

The Archbishop sees “providing jobs” especially for young people as key to revitalizing the region. He also faulted educational texts in public schools in Iraq for referring to all non-Muslims as “infidels” and supports prosecution of those who committed genocide so that victims can have their stories heard.

“Even though Islamic State was defeated, he concluded, “the ideology is still there. “Writing the history from the side of the victims; it would help the other (side) to realize 'okay, never again,” he observed, adding, “Hopefully.”

Do you want to see more articles on issues impacting people in our local communities?