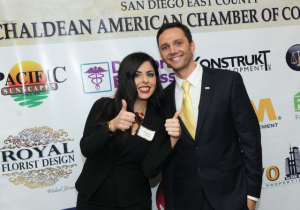 December 5, 2013 (El Cajon ) – The newly formed San Diego East County Chaldean American Chamber of Commerce has elected Ben Kalasho as president during the organization’s gala event at Sycuan Resort on November 22.   Kalasho hailed the event, which drew about 100 attendees, as “a great turn out of professional movers and shakers.”

An estimated 68,000 Chaldean Christians from Iraq now call East County or San Diego home—and 60 percent of them own at least one business. Yet fewer than one percent belonged to a Chamber of Commerce—until now.

According to the Chamber’s website, the organization also aspires to promote Chaldean American accomplishments in California as well as their contributions to the community.